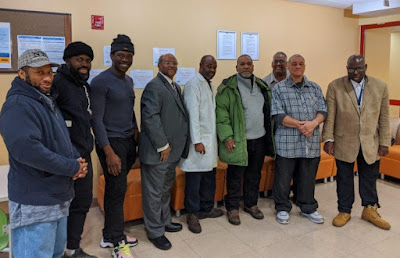 In January, a Men's Health Workshop was held at the Institute for Family Health's Stevenson Family Health Center.
The untimely death of actor Chadwick Boseman (Black Panther) to colon cancer puts a spotlight on the American Cancer Society point that African Americans are 20% more likely to get colorectal cancer and 40% more likely to die from it than other groups (with Black men having the highest incidence). Mr. Boseman’s death at the young age of 43 makes it clear that it is vital that Black men have regular health checkups.
Recognizing the importance of encouraging men to make their health a priority, in January, the first Men’s Health Workshop was held at the Institute for Family Health's Stevenson Family Health Center. Launching such a workshop has been the vision of Bronx Health REACH Community Health Worker Joseph Ellis for some time. "Over the years, many of the men I have spoken with mentioned having struggles with health concerns like diabetes, being overweight, heart disease and being stressed about work and providing for their families. I wanted to do something to address these concerns," said Joseph. "If I could get them all together in a workshop and have their health concerns addressed by a doctor, maybe they would be more receptive to opening up about the challenges they have as men regarding being healthy." Men’s health has also been the concern of Dr. Eric Gayle, Vice President, Medical Services for the Institute for Family Health, who has been a long time doctor to many of the Institute’s Bronx patients.
For the workshop, Joseph and Dr. Gayle came up with several topics that encouraged an open discussion between the men attending. Attendees asked about diabetes, family history, discussing health concerns with your doctor, sexual health, prostate growth and cancer and more. The interaction between the men and Dr. Gayle was dynamic. The questions just kept on coming. The workshop hit home for the men and they were glad to have been given this forum to voice their health issues and concerns in the company of other men. "We had accomplished what we set out to do, which was to have a forum where men can have an open discussion about their health," said Dr. Gayle.
COVID-19 halted the holding of these Men’s Health Workshops. We hope to resume them as soon as it is safe to hold in person gatherings.
at 6:26 PM