On April 27th, Bronx Health REACH and Dan Suraci from Urban Cycling Solutions hosted a webinar about Active Transportation and Complete Streets and how Bronx stakeholders could get involved with advancing this work in the Bronx. Active Transportation is any self-propelled, human-powered mode of mobility, such as walking and bicycling. We reviewed the benefits of active transportation for increasing physical activity, thereby addressing one of the risk factors for obesity, diabetes, heart disease, and stroke. Medical costs of obesity are high, at over $11.8 billion in New York State alone.  Pedestrian and bicycle fatalities have not changed much over the past decade, so there is therefore much room for improvement to make streets safer for all.

Smart Growth America defines Complete Streets as “[Streets] designed and operated to enable safe access for all users, including pedestrians, bicyclists, motorists and transit riders of all ages and abilities.”  Complete Streets balance health, economic vitality, equity, safety, environment, choice, mobility, and livability. They maximize efficiency and space, and encourage climate-friendly transportation options. When planning complete streets, people’s preferred routes are taken into consideration. Reduced traffic speeds save lives, and narrowed lanes help reduce speed of vehicles. Bike lanes and crosswalks with visible paint are safer than those where the paint is worn off; curb extensions and pedestrian islands allow pedestrians to cross streets that aren’t as wide; and ensuring bike parking is available encourages more riders to use their bikes.

Community members can conduct a walk audit of their neighborhood to identify areas of opportunity for Complete Street improvements. On the webinar, we took virtual walk audits to four dangerous intersections in the Bronx – Connor & Provost & Boston Road; 183rd & Grand Concourse; Westchester & Prospect Avenues; and 138th Street and Alexander Avenue. Dan walked us through safety features already existing on some of these streets and areas of opportunity for improvement.

Communities can work with their local municipalities to pass Complete Streets policies, which represent an official mandate to work toward an integrated transportation network for all users, as well the establishment of a reporting framework.  NYC has a “Vision Zero” policy which guides Complete Streets work through the NYC Department of Transportation, however, communities can work with their local Community Boards to advocate for additional changes, or to pressure the city to push a Complete Streets project higher up on the priority list. Some examples of policies that can be implemented in NYC include School Zones and NYC Neighborhood Slow Zones. Successful Complete Streets advisory groups consist of diverse stakeholders as well as a Chamber of Commerce or Business Association, Department of Public Works or Transportation, and the local transit agency. Studies show that more walkable and bikeable communities increase commercial activity and business satisfaction, so it can be especially valuable to get the local business community on board with the proposed changes.

If planned properly, complete street improvements can be no/low cost, and folded into other projects  or utility projects. Measurements to evaluate success can include number of crashes, volume of vehicles, traffic speed, economic vitality, user satisfaction, environmental outcomes, public health outcomes, and public safety. This training was supported by the New York State Energy Research and Development Authority (NYSERDA) and the New York State Department of Health (NYSDOH).
at 4:50 PM 1 comment: 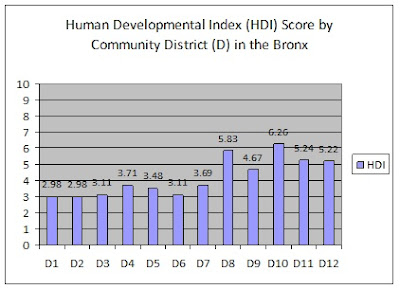 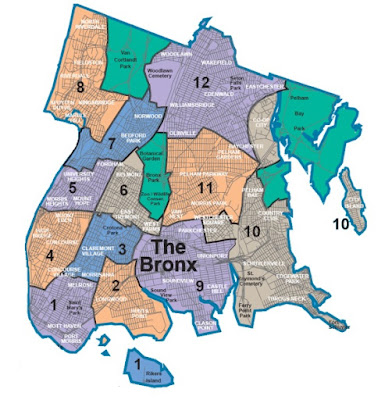 The Bronx Health REACH Coalition founding since 1999 and its collaborations over the years with federal and state agencies, community leaders, faith-based organizations, other organizations and residents has had as its singular focus on the elimination of these health disparities and inequities. It is imperative that all stakeholders mobilize all available resources to mitigate the impact of the COVID-19 pandemic in this vulnerable county and continue to strengthen the socio – political and economic environment and infrastructures that will increase access to, and utilization of, goods and services promoting healthy behaviors and outcomes among all Bronx residents.
at 5:19 PM No comments:

COVID-19 Information; Emergency Food Services for School Children, Seniors and the Community; plus Other Resources 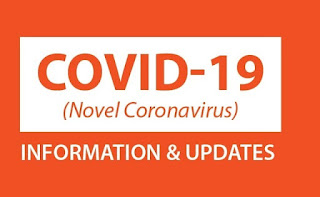 We understand you may be concerned about COVID-19, the Novel Coronavirus that has spread worldwide and is now here in America with New York being the epicenter of it. Your risk of being exposed to the virus is greatest if you have had close contact (within 6 feet) of someone who has COVID-19. If you are having symptoms such as fever, cough or shortness of breath, call your health care provider. If you are severely ill, call 911.

What You Can Do to Stay Healthy


How to Get the Health Care You Need

The Institute for Family Health has health centers in New York City and in Ulster and Dutchess Counties. We offer primary medical care, mental health care, and dental care to people of all ages, regardless of ability to pay. Our centers are open and we can offer many services by video or phone – please call us. Click here for a complete list of locations and phone numbers.

The Office of School Food and Nutrition Services is working around the clock to ensure that students have access to nutritious meals every day. Adults, parents, students and young people under 18 can access breakfast/lunch grab and go bags from 7:30 a.m. to 1:30 p.m. at any of these NYC school sites (Food Hubs).  Text "FOOD" or "COMIDA" to 877-877. Signage indicating food service may not be visible, so students and parents should knock loudly on the front door. The security guard should provide you with a to-go bag. There are Regional Enrichment Centers in NYC where children of first responders, healthcare and transit workers can receive educational programming and 3 hot meals daily.

These locations are serving free meals to seniors:


How to Stay Informed

Only get your information from trustworthy sources like the CDC, the New York State Department of Health and the NYC Department of Health and Mental Hygiene. For updates on the number of confirmed COVID-19 cases and fatalities in New York City, click here. Also, you can call the New York coronavirus hotline at 1-888-364-3065. In NYC, text COVID to 692692 for text updates from Notify NYC.

The City is actively monitoring and responding to the Coronavirus (COVID-19) pandemic. As a community and faith-based partner, you play an important role in helping keep New Yorkers safe and informed.

The NYC Department of Health and Mental Hygiene and NYC Emergency Management hosts a weekly COVID-19 informational call for community and faith leaders. Each week they will provide updates from various city agencies.

New York City needs your help. Here’s how individuals, businesses, and non-profits can help the City and fellow New Yorkers during this COVID-19 crisis:

Share Your Space: If you own or manage a large space, then take the Share Your Space Survey. The survey identifies spaces in your community that could potentially support the City’s emergency operations, such as their response to COVID-19.

DonateNYC: DonateNYC, a program of NYC Department of Sanitation, has resources for individuals, businesses, schools, and agencies to give and receive donated items.

New York Cares: If you are not a licensed medical professional, you can still help the COVID-19 response through New York Cares.

You can give back by giving blood. New York City needs approximately 2,000 people to donate blood every day to maintain its supply. Find a New York Blood Center near you.
at 3:40 PM 1 comment: 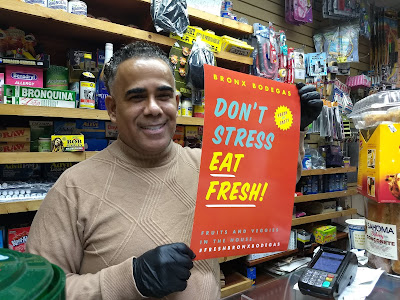 William is the owner of Makey Deli, located at 2704 Third Avenue in the Bronx.

March 9 to 15 is World Salt Awareness Week. On average, Americans eat more than 3,400 mg. of sodium daily – more than double the American Heart Association’s recommended daily limit of 1,500 mg. 77% of the sodium that Americans consume comes from processed foods and food served in restaurants.

Bronx Health REACH, with support from the American Heart Association’s NYC Community Impact Grant, is collaborating with the Bronx healthy food advocate, Shen’naque Sean Butler and his “FRESCH” campaign to expand the number of bodegas selling healthy grab-and-go items. To date, Sean has organized taste tests at bodegas, schools, and in the community, offering hummus, three-bean salad, a vegan salad, and pico de gallo. Future taste tests include cut vegetables with dip, fruit cups, and overnight oats. We hope the combination of taste tests and increased access to these healthy items for sale in the community, coupled with the Don’t Stress, Eat Fresh healthy bodega marketing campaign will offer Bronx residents new items they will get excited about and support their health!

City Harvest has established a relationship with Fairway to get healthy grab-and-go items sold in supermarkets and corner stores in the Bronx. After an initial pilot phase, the following seven Bronx stores are participating in the grab-and-go program:

Consuming less sodium and more fruits and vegetables – including the items promoted through the grab-and-go program – are part of the Dietary Approaches to Stop Hypertension (DASH) diet plan, and is an important step in reducing the risk of diet-related diseases such as hypertension and stroke.