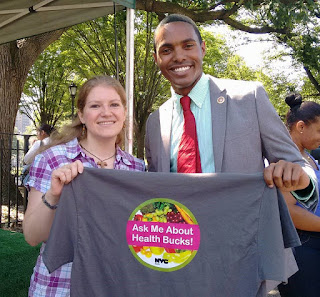 Bronx Health REACH continues its series on individuals who have made a significant contribution to not only the Institute for Family Health, but to the  Black and Latino communities in the Bronx where they have been strong activists for needed change. A notable member of this group of change agents is New York City Council Member Ritchie Torres, representing the 15th Council District in the Central Bronx that includes the communities of Fordham, Mount Hope, Belmont, East Tremont, West Farms, Van Nest, and Allerton.

"By inviting Senator Sanders and Secretary Clinton to tour public housing I was sending a simple message: You cannot confront inequality from the ivory tower. By visiting these public housing projects, you see the abysmal conditions residents live in every day. What you see is the impact from federal disinvestment. How could this be, in a city that has an $80 billion budget, a state that has a $140 billion dollar budget, and a country that has a $4 trillion budget? The tour led Secretary Clinton to commit to secure more funding for public housing."

A central issue of concern Council Member Torres hears from his constituents is affordable housing. "Among my constituents there is anxiety and fear over losing their homes and neighborhoods. We have seen neighborhoods that have been gentrified out of existence, affordable housing has been gentrified out of existence, and my constituents, who are living paycheck to paycheck, are fearful that their neighborhood is next. We need more investment from the federal government to solve the affordability crisis here in New York City.”

The Council Member’s recent legislative efforts have included improving access to mental health services. "If you lack mental wellness, then a whole host of problems can arise. I have struggled with depression in my own life. It's a genuine disease in which you have no control, and can inhibit your ability to live a fully functional life. Knowing this I have introduced legislation requiring the city to create a mental health plan, specifically for LGBT seniors and others in the LGBT community who have been found to have some of the highest rates of depression, anxiety, and thoughts of suicide.”

With the Bronx being ranked 62 out of 62 counties in New York State by the Robert Wood Johnson Foundation County Health Rankings & Roadmaps Report, Council Member Torres believes that no single policy will solve the problem. "Since the Bronx has some of the highest rates of obesity and diabetes, I believe improvements in the public health of the Bronx needs to come from several initiatives such as Health Bucks, expanding the number of green markets, encouraging more healthy food options by creating a zoning or financial incentive for super markets and bodegas to offer healthier eating options. The solutions are there. What is lacking is the political will to overcome the health challenges in the Bronx.”


He also contends that change comes when community members take an active role in civic engagement. “Civic empowerment lies at the heart of everything I do. Communities that are civically empowered attract more economic development, and are in a stronger position to hold elected officials accountable for addressing the community’s fundamental needs. My number one goal is to build civic infrastructure in those neighborhoods I represent. That is why I am a strong supporter of participatory budgeting - it is an effective tool for building civic engagement and improvement. It’s a way for people to take ownership of their neighborhood. You have a right to have a voice in how money will be spent in your neighborhood, and you have a right to expect services that address the core needs of your neighborhood.”
at 8:12 PM