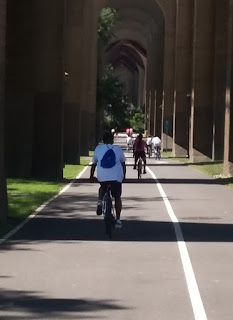 Bronx Lebanon Hospital, a partner with Bronx Health REACH, is creating a bike and soccer program for residents of the Claremont Village community. The goal of the bicycle program is to  provide exercise and, very importantly, to establish bike lanes for the Claremont Village neighborhood connecting Mott Haven, Hunts Point and Claremont, with safe bike routes.

The bicycle program offers, every Saturday from 10 a.m. to 12 p.m. the Claremont in Motion Bike Ride Program  free, learn to ride classes and group rides  open to anyone ten years and older. Held at the Claremont Neighborhood Center, participants are first evaluated on their biking abilities, and if needed, offered riding lessons. Participants also take a road safety course before heading out for a group ride. Group rides have consisted of trips to the Bronx Zoo, the Bronx Botanical Garden, Crotona Park, and Randalls Island. Bike New York assists in the riding lessons and group rides. Another aspect of the bicycle program is working with Recycle a Bicycle to refurbish old bicycles, which will provide participants in the program with an opportunity to learn basic bicycle mechanics.

Street Soccer USA, and Bronx Lebanon Hospital, with support from Bronx Health REACH, is partnering on a  soccer program. On Saturday, September 10th a “Back to School” event was held at CS 55, with soccer training workshops being held for youths aged 5 to 18. The main attraction of the event, the Street Soccer USA Stadium, is where youth participating in the event can play short, 15 minute games during the day. The goal of the soccer program is to establish an after school program at CS 55 starting in October, and eventually build a soccer court within Claremont Village using  an underutilized space on the property.
at 12:04 PM