Rev. Dr. J. Albert Bush – A Strong Voice for the Bronx Community and Beyond 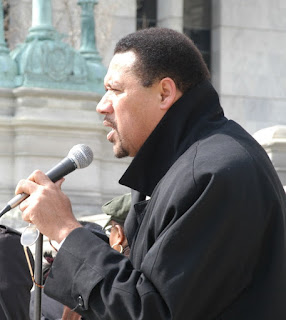 Bronx Health REACH  will be featuring individuals that have made a significant contribution to not only the Institute for Family Health's Bronx Health REACH, but have been strong activists for needed change in the Black and Latino communities in the Bronx as well as elsewhere. A notable member of this group of change agents is the Rev. Dr. J. Albert Bush, Sr. pastor of Walker Memorial Church in the Bronx. Rev. Bush is a 1983 graduate of the Lutheran Theological Southern Seminary in Columbia, South Carolina where he earned a Master of Divinity degree, and later earned a Doctor of Ministry Degree from the Drew University Theological Seminary in New Jersey. 2016 marks his 34th Pastoral Anniversary at Walker Memorial Church.

Growing up in South Carolina as the second of nine children, Rev. Dr. J. Albert Bush was the first in his family to graduate from college. Adopting a liberationist approach to theology, Rev. Bush started to see and understand how God could use poor people as an instrument to make change in their community.

Answering the call to serve at Walker Memorial Church in 1982 provided a wake-up call for him. Walker Memorial Church had been at 116th Street in Harlem, and moved to the Bronx prior to his arrival. “The Bronx at the time had no housing, no industry, just burned out buildings and depression all around. Many of the people in the congregation saw my arrival as a ticket back to Harlem,” says Rev. Bush. Believing that his time in the Bronx would only be two years, Rev. Bush found himself asking God, “Why did you send me here? Do I belong here?”

Out of his quest he discovered that Walker Memorial Church did not need to return to Harlem. He could learn to love and care for the people of this community and lead them so that they could take responsibility for the change that needed to come. Looking back Rev. Bush admits that was a painful decision, but is convinced that it was the right one at the time. “God was making plans for me to do something, and when I embraced that concept, I led my congregation to become involved in the renewal and rebuilding of this community,” says Rev. Bush.

Rev. Bush has also been a long time member of the Bronx Health REACH Coalition where he provides Walker Memorial Church as the meeting place of the Faith Based Outreach workgroup and the quarterly Coalition meetings. He has seen the damage health disparities has done to the community. “This community unfortunately has some of the highest breast cancer rates, highest heart disease rates, and highest amputation rates from diabetes. The thing that surprised me most was the lack of awareness in the community itself. People did not know they were unhealthy,” says Rev. Bush

He believes that healthcare should be more affordable, and more accessible. “You are talking to a man that was once paying $2,500 a month for health insurance over four years to cover his family. That is crazy! One needs a full time job just to pay for health care and that is senseless. It seems that we are comfortable in America keeping and maintaining an underclass,” says Rev. Bush. Rev. Bush adds, “I have experienced a great deal of what the people I seek to help have experienced. I was born in poverty, raised in poverty, and knows what it is like to not have health insurance. I feel every American should have the same level of healthcare that every Senator and Congressman receive. If we can grant it to them, they can return the favor.”

One thing Rev. Bush would change to make health care more equitable would be the elimination of the two class system where those with insurance can see anyone faster than those without insurance that have limited options. “I know of people that have died in the emergency room that had been waiting up to fourteen hours to be seen by a doctor, but people with same problem that have health insurance, they can be seen by someone lickety-split,” says Rev. Bush.

Rev. Bush still continues his work assisting those that have been displaced by disasters in places such as Mississippi and Georgetown, South Carolina. “I am the lead for our denomination (National Baptist Convention) for the disaster response team to any man-made and natural disasters. I have fifteen men on the ground in Mississippi providing relief to those affected by the tornadoes. I have thirty-seven men in Georgetown, South Carolina who are working in partnership with the American Red Cross, FEMA, and other disaster relief agencies, as well as congregations, to aid and assist the people of South Carolina with emergency supplies, such as food, water, and clothing, helping people rebuild homes damaged by the floods,” says Rev. Bush. Currently Rev. Bush is working with officials in Flint, Michigan trying to resolve the man-made disaster of poisoned water.

And the relief efforts are not limited to the United States. In response to the Ebola crisis in Liberia, Rev. Bush Sent aid project through his missionary organization, So Send I You to Providence Baptist Church in Monrovia. “We have sent food relief to Liberia by shipping two ninety foot containers to Liberia with $90,000 worth of food. We also have a daycare center in South Africa in the poorest section of Soweto, and a food kitchen in Swaziland that feeds seventy-five orphan children that have lost both parents to AIDS. We are also building a church and library in South Africa,” says Rev. Bush.
at 2:29 PM