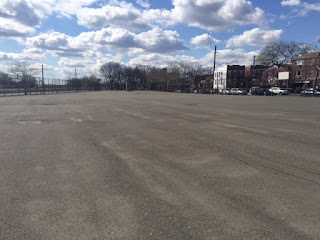 This post is written by Emily Oppenheimer, Program Coordinator for the Partnership for a Healthier Bronx.

Currently, the Bronx Delta School playground is a bare and empty blacktop, in poor condition, without any play structures. The school is located in the Throgg’s Neck Community of the Bronx. The current outdoor space does not entice the 800 plus elementary and middle school students to engage in active play or movement.

Good news, changes are happening at the schoolyard! In February 2016, students began to design play yard renovations, led by Trust for Public Land (TPL). As part of that process, students took a fieldtrip to CS 300 to learn firsthand about a similar Bronx playground project with TPL.
Despite cold temperatures and impending snow, the students ran, jumped, climbed, threw balls, tumbled and explored with glee around the newly renovated CS 300 play yard. Through the TPL process, students select a playground theme; CS300 students chose the sky, “so that when you run, you can feel like you’re flying.” Mr. Dubois, a science teacher whose class is participating in the design process explained, “This really is an amazing project, these students will leave their legacy.”

While visiting CS300, students were immediately engaged with the colors, shapes, structures, plants and art. The energetic transformation to active play was palpable when compared to the passive standing I typically observe at Bronx Delta School’s current playground.  The playground visit gave the students ideas to influence their own playground designs for the Bronx Delta School.

Trust for Public Land engages the entire community in the process. This week I joined Joan Keener of TPL at the PTA Meeting. Joan shared the two student-created playground designs, developed by the four co-located schools and the Phipps Beacon Program. It was fun to hear parent thoughts and perspectives. Overall, there was a lot of excitement, especially given that most families live in the community, and the playground hours will be extended with these renovations.

The updated space will include a track, basketball courts, a kickball space, garden and a jungle gym. These larger scale renovations, led by TPL are funded by the Bronx Borough President through Resolution A Funding and Councilmember Vacca’s Office. Resolution A funding through the Borough President’s Office or City Council can be requested by schools and community groups to initiate large-scale improvement projects, like playgrounds. The TPL designs will be ready in late April, and construction is projected to start summer 2017. 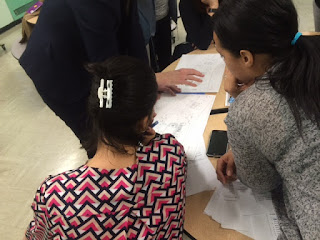 
In the meantime, the school received funding from Bronx Health REACH for an Active Design Project to paint the playground and plant vertical gardens. On Saturday, April 16, we’ll be painting stencils on the playground.
at 11:11 AM