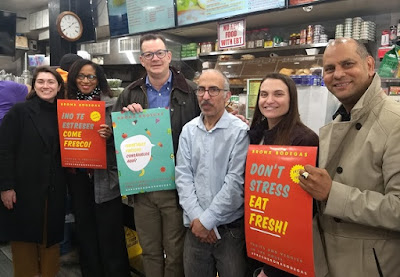 
The Don't Stress, Eat Fresh Healthy Bodega marketing campaign has received $2500 funding from the City Council. Funding was part of the allocation for the Bronx Delegation. In February, members of the Bronx Bodega Partners Workgroup met and spoke with six members of the Bronx Delegation at City Hall about the marketing campaign. At the meeting, some of the Council Members expressed interest in visiting our partner bodegas located in their districts. 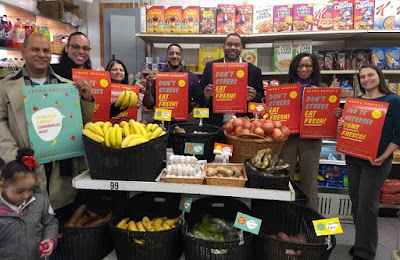 Justin Cortes, Budget Director for Council Member Vanessa L. Gibson, paid a visit to partner bodega Aqui Me Quedo to learn more about the Healthy Bodega Program. Mr. Cortes was joined by Workgroup partners from the Bodega Association, Bronx Health REACH and Montefiore Medical Center. Bishop Earl McKay and son Chris McKay from Church of God of Prophecy, who will be doing a program with the bodega and the Church Youth Group, also joined the tour. News12 The Bronx was there and did a feature on the program. 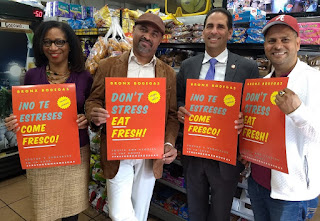 Funding for the Don't Stress, Eat Fresh marketing campaign would help create more consumer awareness of bodegas selling healthy food. The hoped for result would be an increased demand for healthy food in our partner bodegas. To publicize the importance of the campaign, Workgroup members have successfully submitted Op-Eds to various Bronx community newspapers and posted on social media tagging Bronx Council Members.

Click here to find a partner bodega in your neighborhood.
at 5:34 PM