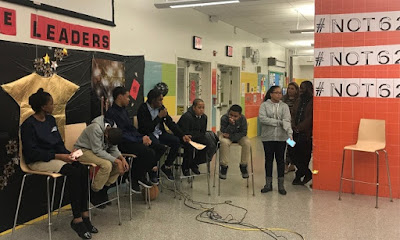 Students from CMSP 327 talking about their winning countermarketing campaign at the award ceremony.

Students from three Bronx schools competed for the most effective campaign to combat sugary drink advertisements. The challenge was to create a video, poster or social media campaign exposing the harmful effects of sugar-sweetened beverages. The winning campaign was a rap video, “Food Fight,” submitted by the students of Comprehensive Model School Project (CMSP 327).

Students participated in an eight-session course in countermarketing focused on reducing the demand for unhealthy food by exposing the motives of these food marketing companies and de-normalizing the marketing activities used to sell their products.  The students learned about the health impacts of sugary beverages, the food environment, and how sugary beverage marketers manipulate the youth to buy and consume their products. Students created  media campaigns to raise awareness about the negative health impacts of sugary beverages throughout their school campus, using videos, posters, music, and social media. The students were also encouraged to use the campaigns to drive policy change through petitions, open forums and sit-ins.

CMSP 327 students encouraged fellow classmates to take action by signing a pledge to drink more water for one week. Those that pledged received a button. If a student who signed the pledge was caught breaking their promise, they had to wear an “IV” attached to a soda bottle to represent the addictive qualities of sugar consumption. PS 721 students played their public service announcement videos about the dangers of drinking sugar sweetened coffee drinks before the films were shown at lunchtime each day. PS 811 students ran a poster campaign illustrating the gruesome effects of too much sugar such as tooth decay.

CMSP 327 (the winner) will work with the Center for Urban Pedagogy (CUP) where a teaching artist will lead the students in an exploration of such fundamental factors as the power structures and systems that impact nutrition and wellness in NYC schools. They will then produce a professional level video, poster or postcard for the public that will show what they learned. We look forward to seeing how these new champions of countermarketing continue to influence their fellow students, educators, and communities!

BronxNet's OPEN 2.0 spoke with some of the CMSP 327 students involved with the project.