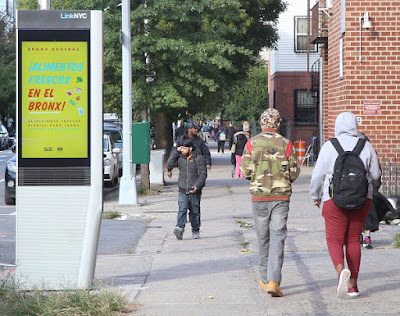 The next time you are walking in the Bronx, riding on an MTA bus in the Bronx, or driving behind one of those buses be sure to check out our Don't Stress, Eat Fresh Healthy Bodega marketing campaign promoting our fifteen partner bodegas and the healthy food they are selling. Ads in English and Spanish are on the inside and on the taillights of Bronx MTA buses. They are also on four bus shelters, two urban panels (signs aboveground at subway stations) and on LinkNYC kiosks. We are also using Geofencing as part of the marketing campaign.

How geofencing works:  If someone is walking within the range of one of our fifteen partner bodegas that has been set up for geofencing, he or she will receive an ad on their smartphone promoting the Healthy Bodega campaign. The ad appears on whatever app the person may be using at the time, or even appear later. With geofencing, the person does not necessarily have to be using their smartphone at the time when passing by the location set for geofencing. When the person clicks on the ad they are taken to a full listing of all the partner bodegas in the Healthy Bodega program listed by zip code so that they can choose a specific bodega to shop for healthy food.

If you see one of our advertisements, take a photo and post on social media with the hashtag #FreshBronxBodegas. The Don't Stress, Eat Fresh campaign runs through December.