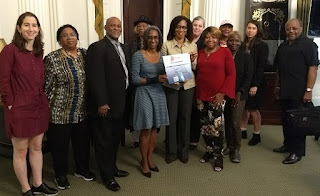 In September members of the Bronx Health REACH Coalition met and spoke with Dr. Herminia Palacio, Deputy Mayor for Health and Human Services.

On September 12th several Bronx Health REACH Coalition members met with Dr. Herminia Palacio, Deputy Mayor for Health and Human Services to discuss the Coalition’s work and Not62 – The Campaign for a Healthy Bronx. Sandra Jenkins from Church of God of Prophecy, Deacon Dorothy Faison and Pastor Robert Foley, Sr. from Cosmopolitan Church, Flora Goldston from Walker Memorial Baptist Church along with Amril Hamer from Transportation Alternatives, and PS 218’s Tabitha Kellner and Nurse Echols all attended the meeting. The Coalition members highlighted the work they’re doing to improve the health of the South Bronx. They were emphatic in pointing to the importance of the Mayor prioritizing the borough in all the City's agencies and resource allocations.

Dr. Palacio, made note of the fact that she was well acquainted with the Bronx having been raised there and understood the concerns the group spotlighted. A follow-up meeting with Dr. Palacio is planned for later in the year as well as a meeting with the NYC Mayor in 2019.
at 6:10 PM