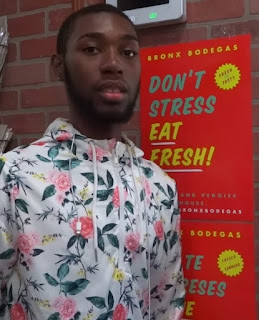 This post was written by Larome Johnson, a participant in the Institute for Family Health's Summer Youth Employment Program.

As I was about to begin my third year at the Institute for Family Health's Summer Youth Employment Program (SYEP), it looked to be more of a challenge than the previous two years. Not only would I be working at a new location (2006 Madison Avenue), but this summer my school required that I take a summer class. Juggling work and school, I was not sure I would be able to handle this busy schedule. Being told that I would be working at the 2006 Madison Avenue location for my SYEP this year scared me a little because I knew this location was the corporate office of the Institute for Family Health, and I didn’t know who I would be working for or what I would be doing, so I was hesitant to begin working. The previous two years I worked at the Walton Health Center mainly calling patients to remind them of their appointments as well as helping them make appointments.

Taking the class in the summer and wanting to hang out with my friends afterwards was a real struggle. But I realized since I was now entering my senior year in high school, I would have to be responsible. And, being able to take the class and work in the SYEP program would help me do just that. On my first day at 2006 Madison Avenue I found out that I would be working for Bronx Health REACH. Working here was very different than working at the Walton Health Center. I had to adjust to working in front of a computer all day doing data entry. Also, this is small, but staying awake was another challenge because of how quiet and cold it was.

I was asked to write a list of goals by my supervisor Emily Oppenheimer that I wanted to achieve at the end of my six-week program. I told her that I would like to be better with computers, more comfortable talking to people, and also to understand and learn what were the professional expectations that I needed to accomplish. To help me improve my computers skills they had me do data entry using Excel and communicate via email using Microsoft Outlook. I also used Microsoft Word to design a flyer and I created a PowerPoint presentation. To make me more comfortable talking to people, I attended meetings with churches participating in the Healthy Children, Healthy Families program.

But I was not the only SYEP here at Bronx Health REACH. There were two others as well, Jay Son and Lionel. After attending the first staff meeting we learned that Bronx Health REACH, to promote their Healthy Bodega program, was creating a social media marketing campaign aimed at Bronx youth. The goal was to encourage them to purchase healthy food at Bronx bodegas. I, along with Jay Son and Lionel, were asked if we could meet with Mike and Emma from the REACH staff to advise them on how to best promote the campaign. They asked us if we were on social media, and if we were to promote the healthy bodegas, what would we do if we created a video. Some of the questions we were asked about social media I thought everyone knew, and that they did what we do as young people on social media everyday. I was wrong. Mike felt we had some good ideas so he asked if we would present them to the staff at an upcoming meeting. I offered to do a PowerPoint presentation. I don't know why I volunteered because it was a lot more work than I expected, and I was nervous since I had never spoken in front of a group before.

To enlighten the Bronx Health REACH team, me, Jay Son and Lionel met a few times to figure out what Bronx Health REACH could do to create a social media campaign for their bodegas. After they showed us the signage and images created for the campaign we thought up various video ideas they could do. Some included: A person juggling apples or singing a jingle in the bodegas; a contest similar to the Ice Bucket challenge such as a viral dance in the bodegas; a teenager buying something healthy from a bodega and saying, “If I can do it, so can you!” The videos could be posted on Instagram and Snapchat. Honestly, I thought that everyone had Snapchat but apparently it’s just a teenager thing because Bronx Health REACH does not have a Snapchat. If they did, they would be reaching a lot more Bronx youth. We explained how Snapchat allowed you to post short videos and pictures of basically anything you wanted. Also, in the presentation we gave examples of some snaps people can make to get Bronx Health REACH trending. Although creating the PowerPoint was tedious at times, it enabled me to step out of my comfort zone by presenting ideas to a group, something I never thought I would be doing.

I felt my SYEP at Bronx Health REACH helped me in many ways prepare for college and a job in the future. I enjoyed getting to know my supervisors and people in the office. Everyone was very welcoming and eager to pick my brain for their social media campaign. Just being in this office environment showed me what type of office community I would want to be in. This experience was very helpful and I honestly did enjoy it. Bronx Health REACH asked me, Jay Son and Lionel to work the week after our SYEP ends to help them with the social media marketing for the Healthy Bodega Program.

I don’t think that I could have this as my career because there are many other things I would like to pursue but I feel this is a great organization to give me a kick start in life.