Healthy Bodega Owners Committed to Improving the Health of their Community 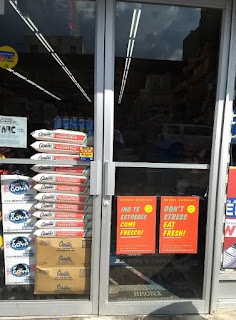 This post was written by Juan Mendoza and Naomi Heisler.

Juan Mendoza was an intern with the Bronx Health REACH Creating Healthy Schools and Communities program who worked on the Don’t Stress, Eat Fresh marketing campaign as part of the Cooperative Education Program at Hostos College. Juan is studying for his Associate’s in Community Health and is expected to graduate this fall.

As part of our internship program at Bronx Health REACH, Naomi Heisler and I were assigned the task of liaison to the bodega owners involved in the Don’t Stress, Eat Fresh marketing campaign. I had this feeling that convincing bodega owners to sell healthy items was going to be a challenge. Scheduling a time to speak with the 5 bodega owners was difficult enough, but also getting them to partner with a school to promote the Don’t Stress, Eat Fresh Healthy Bodega Campaign I thought would be impossible! Fortunately, it wasn’t as hard as I had thought.

At first we encountered resistance from some of the bodega owners. “My store has been here more than 20 years, and when students from the nearby school come in to order breakfast, they only choose a bacon, egg and cheese sandwich. In the afternoon, students are not purchasing fruits or salads,” said one owner. Once we explained how the partner school and Bronx Health REACH was going to drive more customers to the store to buy healthy items, the owner was willing to hear what I had to say. The plan was simple: the students would conduct a campaign to promote the sale of a healthy item that the owner selected. We pointed out that he could start by stocking a modest amount of healthy items in the first few days to see if the promotional event was working.

Then, he could restock the healthy items the following week, based on customers’ response. The goal was to run the promotional event for one month. If successful, he could continue to sell the items.  Despite his initial negative mindset, I convinced this owner and the four others that by participating in the  'Don’t Stress, Eat Fresh' Healthy Bodega campaign, would significantly benefit their stores and local communities.

We surveyed the stores to determine areas for improvement in promoting healthy food and beverages. Then we provided the five bodega owners and staff with free training and resources. During the Don’t Stress, Eat Fresh training, Naomi and I gave the owners tips on how to promote and market healthier options using standard food marketing techniques. These included: placing a cooler stocked with cold water or fruit salad next to the register to encourage people to make a healthy impulse purchase on the go; placing healthy items on the racks towards the front of the store and at children’s eye-level; and giving away free samples of fresh cut fruit or low-sodium deli meat. We explained that this was another way to attract customers to the deli counter and engage them in a conversation about why low-sodium meat and cheese are healthier and tastier options. We also gave the bodega staff a nutrition label reading lesson and advice on how to prepare different recipes, so they could provide healthier options to their customers.

We were impressed to see the positive steps bodega owners took to become a healthier bodega with the help of their partner schools PS36, 443 and 294. M.H. Deli Grocery, (located at 1405 Walton Ave, Bronx, NY, 10452), placed fruit salads, garden salads and water in a beverage case near the entrance. M.H. Deli Grocery is participating in the program for the second year in a row. Eye-catching signs created by PS294 students from last year are still on display. The signs (in English and in Spanish) hang above healthier options such as water, trail mix, and baked chips. The signs, the bodega owner told us, has drawn attention to those healthy products from PS 294 students, parents, and teachers who frequent the bodega. The success of the student project from last year was one of the reasons the owner agreed to do this project again. Another reason was that his son attends PS294.

Saisel Alloltacar, the owner of SABA Deli, located at 1183 Castle Hill Ave, also has a son attending the partner school, PS36. But that wasn’t the only reason why he decided to do this project. Saisel always has healthy food available in his bodega so “whenever the community decides to make that change in their lives, they can purchase it at my store.” It seems the bodega owners were always willing to sell healthy food, they just needed to believe that their customers would buy these foods. Once they had the support of Naomi and I, and the students from the nearby schools who really care about their community, we found the bodega owners were willing to make the changes. The result, a healthier community.

It has been such a beautiful experience for both Naomi and I to see this project come together, how our efforts are paying off, and that the community is benefitting from our work.
at 4:09 PM