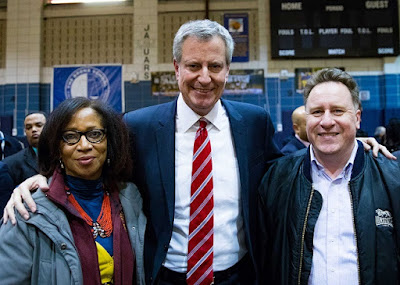 In April, eleven members of the Bronx Health REACH Health Disparities Workgroup attended a Bronx Town Hall meeting held by Mayor Bill de Blasio. The workgroup was there to draw the Mayor’s attention to the very poor health outcomes of Bronx residents, evidenced in the Robert Wood Johnson County Health Ranking Report that ranks the Bronx 62 out of New York State’s 62 counties in health outcomes and health factors. They were also there to ask the Mayor to make the health of the Bronx a priority of his administration.

During the question and answer section of the town hall, the Workgroup got to do just that. First, Michael Johnson, Bronx Health REACH’s Communications Associate, asked the Mayor what was he and his Administration doing to improve the health of the Bronx. In response, the Mayor pointed to the widely accepted idea that poor health outcomes are a result, not just of a lack of healthcare but also of social and economic factors at work. We couldn’t agree with him more. 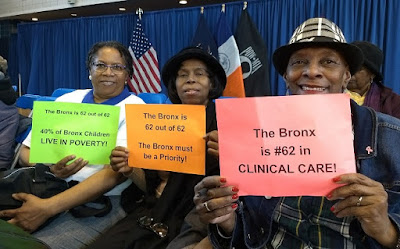 Hearing this from him was the perfect set up for Charmaine Ruddock, Bronx Health REACH’s Project Director, to request a meeting with the Mayor and the Workgroup. The Mayor readily agreed. As Charmaine pointed out to the Mayor, a great urgency is felt to have the Administration prioritize the Bronx especially in light of the fact that, because of term limits this, his second term, is also his last. As you can imagine, the Workgroup members attending the Townhall left feeling, ‘mission accomplished’.

"I'm really excited that Charmaine was able to request a meeting between the Health Disparities Workgroup and the Mayor and his staff. It's important for the Mayor to be aware of the poor health outcomes of Bronx residents and that something has to be done to improve it," said Sandra Jenkins, from Church of God of Prophecy, a member of Bronx Health REACH’s Faith Based Outreach Initiative and the Health Disparities Workgroup.
at 2:20 PM