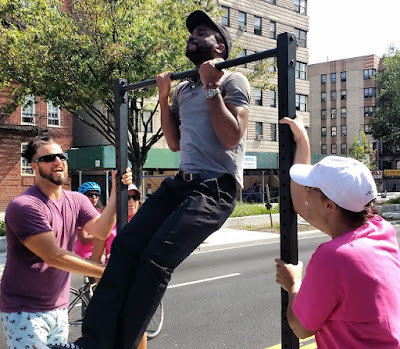 Bronx Health REACH along with partner Casita Maria Center for Arts & Education, and their collaborators New York Community Trust, Bronx-Lebanon Hospital and Bronx Cultural Ambassador, Baron Ambrosia are engaging Bronx residents of all ages to make the Bronx “The World’s Strongest Borough” by doing pull ups. To get into the Guinness Book of World Records, Baron Ambrosia has been taking a "Mobile Pull-Up Bar of Power” to Bronx parks and public events. He was at the August 20 Boogie on the Boulevard to get more participants to add to the number of pull-ups.