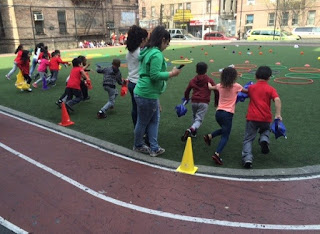 This post was written by Victor Gidarisingh, Program Coordinator for the Creating Healthy Schools and Communities program.

A few weeks ago I found myself downtown at City Hall, not to have a leisurely stroll on the Brooklyn Bridge, but to represent Bronx Health REACH, a member of the Phys Ed for All Coalition. I was there to provide testimony supporting increased funding for PE in New York City public schools, especially those in the South Bronx. Even though physical education mattered to me, as I was sitting in the Committee Room at City Hall for the first time in my life, I was not certain if that was the case for the other strange and important audience members also assembled to provide testimony.

After waiting almost four hours to be called, it was my turn to give testimony. As I reached out and gripped the microphone I felt my heart leap to my throat. I felt like a rookie quarterback, called up to play in the fourth quarter preparing for the final drive. But my team was those South Bronx schools in Districts 7, 8, 9, and 12, and I needed to deliver for them. Tucking my chin, I testified that those schools in the South Bronx, specifically those in Districts 7 and 12 had not been beneficiaries of the PE Works program, while District 9 schools with the program had made great strides. As I made this point, I could see Council Member Vanessa L. Gibson nod approvingly as this is her district. I went on to emphasize that physical activity should not be divorced from the academic achievement in students through integrated learning. I assured the Council members that PE would flourish if funding made its way to those districts that needed it the most, like those in the South Bronx. When it does, students attending those Bronx schools will not only improve their health outcomes, but their academic outcomes will also improve.