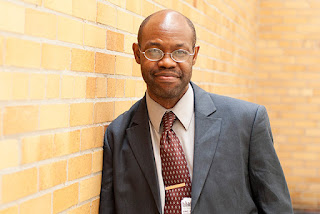 Bronx Health REACH continues its series on individuals who have made a significant contribution to not only the Institute for Family Health, but to the African-American, Black and Latino communities in the Bronx where they have been strong activists for needed change. A notable member of this group of change agents is Dr. Eric Gayle, Vice President, Medical Services and Regional Medical Director, in New York City for the Institute for Family Health. Dr. Gayle also mentors minority students who are interested in careers in medicine, and leads the Institute’s credentialing committee.

Growing up in Kingston, Jamaica Dr. Eric Gayle quickly learned that a community lacking robust healthcare means having to wake up at 4:30 in the morning to stand in line for hours to be seen by a doctor. To Dr. Gayle, this did not seem right, and those experiences influenced him to become a doctor. The path to becoming a doctor began following his arrival in New York with his mother after completing high school in Jamaica. Dr. Gayle found having to navigate getting into college and medical school in the United States had its challenges. One was the few financial resources available to him; the other was improving his language skills since his spoken language was his native Jamaican patois. He found that he had to work hard to enhance his own standing in the eyes of others for them to give him access to opportunities. After determining the best avenue for getting into medical school, Dr. Gayle enrolled at the Sophie Davis Biomedical Education/CUNY School of Medicine, beginning his path to a career in medicine.

One class he took opened his eyes to the poor health services many New Yorkers received. Dr. Gayle had to review health services offered to the Harlem community and in doing so he was shocked to learn that Harlem residents received the same poor health services as Dr. Gayle experienced growing up in Jamaica. As a Bronx resident Dr. Gayle also observed that his neighbors in the community were not getting what they needed to become healthy. After completing his B.S. from the Sophie Davis Biomedical Education/CUNY School of Medicine, Dr. Gayle transferred to the Mount Sinai School of Medicine to complete his medical degree. He then did his residency in family medicine at Beth Israel Hospital, and upon completion of his residency in 1998, went to work at one of the Institute for Family Health’s (IFH), clinics in the Bronx.

His current responsibilities relate to the overall operations of the IFH New York City clinical centers. Dr. Gayle is responsible for ensuring that there is enough provider staff at all IFH centers, and that providers meet expectations on the quality of care for patients. "We are here for the patients, to improve their health and to serve the community. My principal responsibility is to give all health centers everything they need to be successful and meet that objective. Even though practicing in underserved communities is not easy, I can impact someone’s health by prescribing medication or offering them advice. It is hard to impact some of the social determinants of their health. Those are outside my control," says Dr. Gayle.

From his days growing up in Jamaica, Dr. Gayle knows what his patients are experiencing when it comes to accessing healthcare in underserved communities. "I know what it means to be in poverty and have social determinants impact your health. When my mother and I arrived in New York we did not have health insurance so I understand what my patients are going through and I have an understanding of what it takes to get them through these challenges," says Dr. Gayle. Addressing the current state of health disparities, Dr. Gayle believes there is more work to be done. "I don’t think we have impacted social determinants of health. I see there is dialogue and research but nothing has been done to improve income equality or housing, as many are still dealing with the same issues that were there 20 years ago. People are struggling to find food. Why does that continue to be a problem? It would take commitment and resources such as money to revamp the whole system," says Dr. Gayle.


A commitment to providing underserved communities with high quality medical care is what has been a guiding passion throughout Dr. Gayle’s career. So what advice would he give to those graduating medical school seeking a similar career but who are graduating with $200,000-$300,000 in student debt? “Though, this may be seen as a significant barrier I tell students not to be discouraged. If you have the passion, and really want to do this work, you can be successful," says Dr. Gayle.