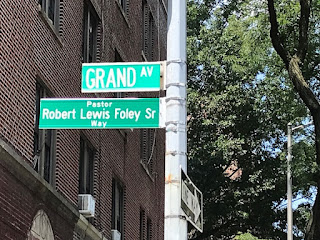 Grand Avenue and 190th Street in the Bronx has been renamed Pastor Robert Lewis Foley Sr Way.
On July 24 a portion of Grand Avenue near the corner of 190th Street in the Bronx, opposite the Cosmopolitan Church of the Lord Jesus, was renamed Pastor Robert Lewis Foley, Sr. Way.
Pastor Robert L. Foley, Sr., D. Min, D.D. Pastor of Cosmopolitan Church of the Lord Jesus in the Bronx, was a leader of the Bronx Health REACH coalition for almost twenty years, since its start as a community coalition led by the Institute for Family Health with the goal of eliminating racial and ethnic health disparities in the South Bronx. It is an honor richly deserved in the memory of a man who also had a vision of a new Bronx and who worked hard to make that vision a reality. This quote of his, which was printed at the bottom of the program, speaks volume of that commitment, “The clearest evidence of the greater love is seen whenever a person is willing to sacrifice their convenience, their comfort, and their own security for the well-being of another person.”
Maxine Golub, Senior Vice President, Planning and Development for the Institute for Family Health (IFH) represented IFH and Bronx Health REACH at the street co-naming event dedicated in his memory.
Below are Maxine's remarks:
Good morning. Let me start by saying that my colleagues Charmaine Ruddock and Neil Calman were both so sorry that they couldn’t be here today. I know I speak for both of them, as well as for my colleagues at the Institute for Family Health and Bronx Health REACH. We were so fortunate to have had Reverend Foley as a leader in our work for almost 20 years.
For those of you who don’t know, in 1999, the Institute received funding from the Centers for Disease Control to lead a project to eliminate racial disparities in health outcomes, with an initial focus on diabetes. We owe Reverend Foley’s involvement to my dear friend Joyce Davis. When I told her about the grant we had just received, and that we wanted to have a faith-based component, she told me we needed to meet with Reverend Foley. I remember it well – breakfast at the Riverdale Diner, telling him what we were thinking, and listening to him tell us what we needed to do.
And later on, when we met again, this time with Charmaine, our newly hired director, he pulled out a directory of churches of diverse denominations, ethnic and racial groups, and told us who to invite to the very first meeting, a pastor’s breakfast held at Cosmopolitan. Those discussions changed my life, and I believe, ultimately changed the lives of thousands of Bronx residents, as the pastors took up the call to teach their congregants about nutrition, exercise, disease management, and navigating the health care system.
Of course, under Reverend Foley’s leadership, in partnership with Pastor Joe Bush and Deacon Davis, Bronx Health REACH ultimately became a grassroots effort committed to demanding a truly equitable health care system. He understood that to achieve that we needed to engage both the community and our elected representatives. Together he and Pastor Bush talked the Pastors into providing buses to carry 500 Bronx residents to Albany to talk about segregated care. He then urged us to file a complaint with the Attorney General, and instigated an effort to  have legislation sponsored in the State Assembly. But when Charmaine and I reminisced to plan these remarks, the thing we both remembered most fondly from that very first breakfast was the grits – the best either of us have ever had, before or since!
Over the years, Reverend Foley participated in numerous committees and events, always lending his unique perspective on economic and political realities mixed with history and faith. As far back as 2003, in a video that we made called Voices of Health Equality, he spoke about the browning of America and the impact on white majority culture. He gave our work a historical context, naming the movement to eliminate racial disparities in health the “civil rights movement” of our time.
Reverend Foley remained committed to the work of Bronx Health REACH from the day we met to his untimely death.  He never said no when we asked him to participate in a meeting or a panel, and he often leveraged his personal, political and professional connections to support our work. He invited, then challenged and cajoled others to become actively involved, reminding his colleagues that efforts to address racial and ethnic health disparities were long overdue, and that resources provided by grant funding could disappear at any time.
We were so lucky to have Reverend Foley in our corner for as long as we did. His words and actions changed our lives, and the lives of countless others, and we miss him dearly.  We are so proud to have shared in his work and now, the dedication of this street in his name.
at 11:06 AM