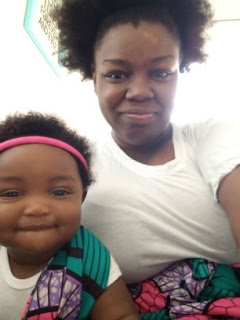 "It was a wonderful event to participate in and celebrate our cultural roots and reclaim black breastfeeding as a community." - Charline and Sofia-Michele.

This article was written by Judy Fram, International Board Certified Lactation Consultant (IBCLC).

Singing events were held the first and third Wednesdays in August. Attendees sang along to “Mi Familia,” in Spanish and sign language. Also shared were “Pata,” in Xhosa, a language spoken in South Africa, with clapping, and the old Sesame Street favorite, in English and Spanish, “Baa Baa Bamba.”  During the second week of August, breastfeeding families participated in virtual story reading with their baby that took place in 4 languages (Bambara, French, Spanish and English). Classics like We Like to Nurse, as well as newer texts such as C’est Pas Moi, a French book and Criados y Acariciados –a Spanish book, were read by various participants. A new favorite was Say Hello, which follows a little girl saying “hello” in ten different languages to her neighbors from many cultures. Many mothers attended every event of the month. One mother even brought her current favorite book, which she shared by reading to the group with her baby on her lap.

For our last Baby Café event of August we offered attendees the option to participate in our yearly African Breastfeeding Mothers’ Fashion show, as well as a new event, Show Your Beautiful Black or Brown Baby.  We shared a slide show based on Black International Board-Certified Lactation Consultant Kim Durdin’s 2019 article, “It’s Black Breastfeeding Week- Here’s Why It Matters.” We acknowledged the hard truths about these biases and inequities, and then moved into celebrating. We sang and clapped to Amawolé, a song from the Ivory Coast, and twirled for each other in African-inspired clothing. Nursing moms held their babies up to their computer screens to share their sweet gorgeousness. In a time of global pandemic, with growing visibility of the poison of systemic racism and health disparities, events like Black Breastfeeding Week seek to center those that are often on the margins, and provided an opportunity for all of us to share and really see each other, to celebrate, and lift each other up.

Over the course of that long and full month, we celebrated the ways that nourish brains and bodies. From breastmilk, to reading, singing, and moving. We were thrilled to have highlighted the importance of education, individual and especially the societal support, as coupled with the professional and cultural humility needed to help families meet their breastfeeding goals.