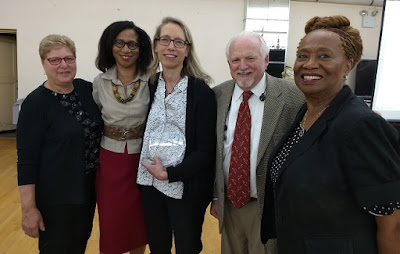 This year marks the 20th anniversary of the Center for Disease Control's (CDC) Racial and Ethnic Approaches to Community Health (REACH) program. And, as one of the grantees funded since the inception of REACH, it also is Bronx Health REACH's (BHR) 20th anniversary as well. At the June 7th Coalition meeting, a panel of some of the founding members looked back at the past 20 years. The panelists included: Dr. Neil S. Calman, President and Chief Executive Officer of the Institute for Family Health; Maxine Golub, Senior Vice President of Program Development at the Institute for Family Health; Joyce Davis of Joyce Davis Consultants and Walker Memorial Baptist Church; and Sue Kaplan from NYU School of Medicine, Department of Population Health. The panelists discussed how it all began for BHR in 1999, what was the motivation, the vision, the mission.

"You had to go out into the community and do something, so I thought that applying for the Centers for Disease Control and Prevention's (CDC) very first REACH grant was the perfect opportunity for us to build on the work inside our organization and to do something outside the walls of our community health centers about bringing the issue of race to the forefront. We were not thinking about the social determinants at the time, but we felt that we had to address the inequities in the health care system," said Dr. Calman.

Maxine added, "At the time I did not think we had the expertise but we wrote the grant and the CDC gave us a year to plan. We held focus groups and we learned to ask, rather than, to tell the participants, and used their feedback to write a community action plan with input from the community."

"One Pastor at a Bronx church told us that he had young people in his congregation with toes cut off due to health ailments and something had to be done to address these issues," said Joyce. It was an open and engaging panel where all agreed that despite the many accomplishments of BHR, there is still much work to be done to eliminate health disparities.