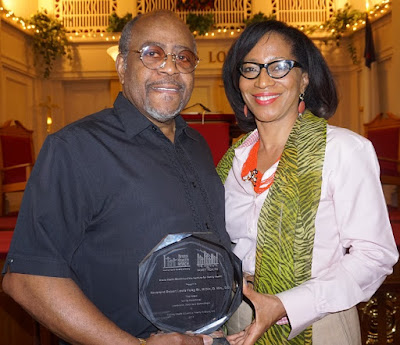 In 2017, Bronx Health REACH Director Charmaine Ruddock presented an award to Pastor Robert Lewis Foley, Sr., D. Min, D.D. Pastor of Bronx Health REACH Coalition partner church Cosmopolitan Church of the Lord Jesus for his commitment to making health equality a reality in the Bronx. The award was presented at a ceremony commemorating his many years of service as pastor of Cosmopolitan Church of the Lord Jesus.


With the sudden and untimely death of Pastor Robert Lewis Foley, Sr., D. Min, D.D. Pastor of Cosmopolitan Church of the Lord Jesus in the Bronx on Friday, April 26th, Bronx Health REACH lost one of its founding leaders and a giant in the effort to make the Bronx a place of health, and wellness and justice for all. Pastor Foley had been a partner with Bronx Health REACH for almost twenty years, since its start as a small community coalition led by the Institute for Family Health with the goal of eliminating racial and ethnic health disparities in the South Bronx.

Pastor Foley's exceptional leadership, vision and commitment to making health equality a reality in the Bronx was rooted in his early history of civil rights activism in the South. Coming to the Bronx in the 1970’s, he continued his efforts on social and racial justice advocating for long term sustainable change to the conditions that contribute to Bronx residents living sicker and dying younger than they should.

In addition to his work with Bronx Health REACH, he had been a leader and founding member of the Black United Leadership in the Bronx (BULB) and served as a member of the Community Advisory Board of Montefiore Hospital, the Advisory Board of the Bronx Region of the American Cancer Society, the New York Yankees Community Relations Council, and the Police/Clergy Liaison for the 52nd Precinct in the Bronx.

On Sunday, May 5th, hundreds gathered for his funeral service at Cosmopolitan Church of the Lord Jesus to pay homage to him. Bronx Health REACH's Charmaine Ruddock, Council Member Fernando Cabrera and Rev. Dr. J. Albert Bush, Sr., Pastor of Walker Memorial Baptist Church, and a longtime partner of Bronx Health REACH remembered this amazing man and his many contributions to the community he served so faithfully.

You can read a profile of Pastor Foley by clicking here, and view Pastor Foley in a recently completed video and a 2009 CNN segment.
at 6:04 PM