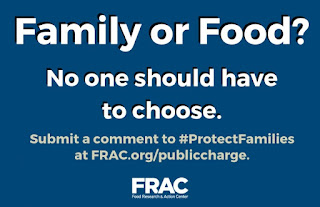 The Trump Administration has announced an executive action to make changes to the public charge rule. This executive action would make it harder for legal immigrants seeking permanent residency to get it if they have received certain kinds of public assistance including Medicaid, Supplemental Nutrition Assistance Program (SNAP)/ food stamps, and housing subsidies. Below is the comment sent by the Bronx Health REACH Coalition in response to the Department of Homeland Security’s proposed changes to the public charge rule.

I am writing on behalf of the Bronx Health REACH Coalition to strongly oppose the Department of Homeland Security’s proposed changes to the public charge rule and ask that it be withdrawn. The Rule would significantly expand the list of programs that determine if an immigrant is a public charge and will almost certainly harm the health of immigrants and their families, regardless of their status, and lead to higher health spending at the expense of U.S. taxpayers.

The Bronx Health REACH Coalition, led by the Institute for Family Health, a network of federally qualified health centers, was formed in 1999 to eliminate racial and ethnic disparities in health outcomes in diabetes and heart disease in African American and Latino communities in the Bronx. The coalition has a successful history of action to improve health, prevent chronic diseases, and reduce health disparities in high-need Bronx communities. The Bronx Health REACH Coalition includes over 70 community-based organizations, health care providers, faith-based institutions, housing and social service agencies, and community residents.

In New York City (NYC), deeply entrenched health disparities continue to overburden the Bronx. Relative to NYC, the Bronx experiences higher levels of obesity (more than double the rate in nearby Manhattan), as well as a higher prevalence of obesity-related chronic conditions including hypertension and diabetes.  The 2018 Robert Wood Johnson Foundation’s County Health Rankings and Roadmaps ranked Bronx County the “least healthy” county of the 62 in New York State for the ninth year in a row. The Bronx is also the hungriest borough with more than one in four Bronx residents experiencing food insecurity.(1)  The Bronx Health REACH coalition believes that the changes to the public charge rule will prevent the most vulnerable individuals in the Bronx from accessing vital health and nutrition services such as Medicaid and SNAP for fear of deportation, or inability to secure permanent residency status.

The proposed Rule would cause immigrants, including the 37 percent of Bronx residents who are immigrants, many of whom  are legally authorized to participate in SNAP and other programs, including Medicaid, Medicare Part D Low Income Subsidy, and housing assistance, to decline assistance or disenroll, jeopardizing their food security, health, well-being, and economic security. (2) As the Administration acknowledges, public benefits “play a significant role” in the lives of recipients (83 Fed. Reg. 51,163). These programs provide critical support to assist individuals and families to work, to attend school, and to maintain and improve their health. When individuals and families access these vital programs the entire community and country benefits and when they do not, food security, health, education, and economic security suffer. Bronx-based immigrants are a large part of the borough’s economic success, making up nearly half of the work force and 60 percent of self-employed entrepreneurs. (3) Making changes to the public charge Rule could threaten the already fragile economy of the Bronx as 31 percent of Bronx residents of all ages live below the federal poverty line, and the six highest-poverty neighborhoods in NYC are all located in the Bronx. (4)

This Rule will not only impact participation in SNAP but also participation in other vital nutrition programs, rolling back progress in addressing hunger and poverty in this country. A recent study found that immigrant families — including those who are lawfully present — are experiencing resounding levels of fear and uncertainty.  While public benefit programs, like WIC, and other child nutrition programs are not included in the proposed public charge Rule, the fear, confusion, and caution surrounding the Rule would have a spill-over impact on these programs, resulting in immigrant families forgoing vital nutrition assistance. The Bronx Health REACH Coalition actively promotes programs such as SNAP and WIC as they are integral to improving the health outcomes of residents of the Bronx including the many immigrants who live in this borough.

For the aforementioned reasons, Bronx Health REACH opposes the changes to the public charge Rule. Instead, we ask that the Department focus its efforts on advancing policies that support the citizenship, health and wellbeing of immigrants so that they can support themselves and their families in the future and become healthy, productive members of society.

Thank you in advance for your time and consideration of this letter.