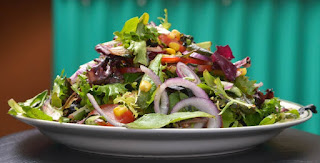 The Bronx Salad is now available at seven Bronx eateries during NYC Restaurant Week Winter 2018 through February 9. Launched in the Bronx in 2016, The Bronx Salad is part of the Healthy Restaurant Initiative, a collaboration between the Institute for Family Health’s Bronx Health REACH Coalition, South Bronx Overall Economic Development Corporation (SoBRO), and the United Business Cooperative (UBC). The Bronx Salad and its signature dressing have received unanimous praise from over 1,000 Bronxites. Made with simple, fresh ingredients, the dressing includes the famous Bronx Greenmarket Hot Sauce, created by acclaimed Chef King Phojanakong, using peppers grown at more than 40 Bronx greenmarket farms and community gardens.

The Bronx Salad is available at the following Bronx locations during NYC Restaurant Week Winter 2018:

To date The Bronx Salad has been offered in several Bronx eateries and has been served to over 500 people at public events in the Bronx such as Boogie on the Boulevard. Initially planned as part of a healthy menu initiative with local eateries, The Bronx Salad has expanded beyond restaurants and is now served at schools and after school programs. BronxWorks has served The Bronx Salad to over 600 people in their children, teen, and adult programs, and The Bronx Salad Toolkit for Schools has been given out to fifteen schools in the South Bronx. Five of those schools have grown and harvested some of the ingredients for the salad.