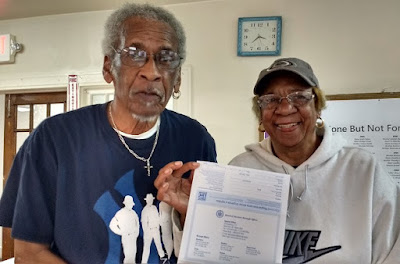 With help from Bronx Health REACH's faith based partner churches, Deacon Dorothy Faison of Cosmopolitan Church of the Lord Jesus and Royal Eason of Friendly Baptist Church, more Bronx residents have become registered voters. Deacon Faison, along with members of Cosmopolitan Church (Pastor Robert L. Foley Sr., Deacon Palmer, Deacon Rose and Sister Robinson) led three voter registration drives from July to September. When they positioned themselves outside the Fordham Road 4 train station, most of the people they approached were already registered to vote, but many knew others that were not registered to vote and took the forms to give to them. Deacon Faison stated that with the help of one Spanish speaking parishioner, they were able to reach more people and distributed over 150 voter registration forms.

Royal Eason, a member of Friendly Baptist Church led a voter registration drive by himself in the Soundview Park area and at a neighborhood shopping mall. He distributed over 200 voter registration forms and was able to get those that were not registered to vote to fill out the forms right there, which he then dropped off at a Post Office near his home. Why did he go out and register voters? "I got tired of hearing people talk about how they are disgusted with all the bad things happening in their neighborhood. I would let those that were not registered to vote know that it was their duty to vote, and if they didn't vote they didn't get to say anything about how bad things are. A lot of people don't realize the power of what voting can do, and what you can and cannot get unless you vote."
at 5:28 PM