An Activist at Heart, Tish James Fights for Health Equity 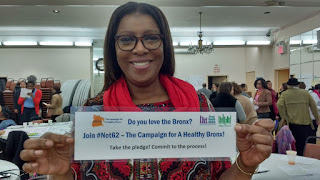 “I’m going to step outside of being an elected official for a moment because in my heart of hearts, I am an activist,” expressed Letitia James, Public Advocate for the City of New York at the December Bronx Health REACH Coalition Meeting. That sense of activism began in her teens after her brother had been arrested and accused of stealing a bicycle. She went to court with her mother and it was the poor treatment by the court staff that day which made Ms. James commit to becoming an attorney so others would have an advocate and not have to be at the mercy of the court system. Ms. James graduated from Howard University School of Law, earning her law degree in 1989. After that she worked as a public defender for the Legal Aid Society. She served as a councilwoman representing Fort Greene, Brooklyn. In 2014, Ms. James became New York City Public Advocate. She is the first woman of color to hold any citywide elected official position.

To assure health equity for all New York City residents, the Public Advocate has the ability to introduce legislation and work closely with members of the City Council along with the Governor and Mayor to address the disparities that currently exist. One of the issues she has focused on throughout her career has been improving people’s access to healthcare, and protecting the safety net that public hospitals provide. As a Councilmember Ms. James was involved in saving Interfaith Medical Center in Brooklyn on two occasions when it had been scheduled to close, as well as attempting to save, though it eventually closed, North Central Bronx Hospital’s labor and delivery, nursery and neonatal care units in the Bronx. She has also been a fierce champion of the services needed to reduce and eventually eliminate infant mortality. “Fort Green had one of the highest infant mortality rates and I created an initiative to address infant mortality not just in Brooklyn, but the South Bronx as well.”

At the Bronx Health REACH Community Coalition meeting last December, Ms. James shared some of the concerns her constituents have with the new administration. “My constituents are the residents of the City of New York and many of them are now very fearful.  Our Muslim residents fear that they will be profiled, placed on a list or deported. There is fear within the LGBTQ community; fear among young women concerned about their reproductive health; fear among African-Americans that we are going to lose all the progress that have been made.”

When asked about the steps the Bronx should take to move out of being ranked the unhealthiest county in New York State, Ms. James pointed to the many problems begging for solutions. “Efforts focused on healthy living are still not enough. Smoking cessation continues to be a problem. Exercise tends to be a challenge and the fact that our diets are so heavily laden with starch and sugar is a major problem. Solutions must include renovating our playgrounds and parks where individuals can exercise; forgiving the loans of doctors who would serve in medically underserved communities all throughout New York City, and ensuring that mental health is available for all who need it. These are but a few of the solutions needed if the Bronx is to move from being ranked 62 out of 62.”

What does the future hold for Ms. James? “My immediate focus is on doing the most good for the citizens of New York who elected me as their Public Advocate. The world does not revolve around one’s self. We have a responsibility and a duty to care for others. That is the rent one pays to be here on earth.”
at 8:46 PM