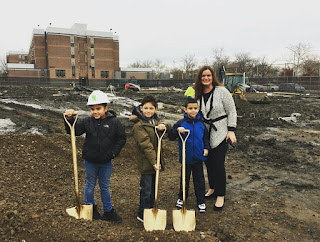 Friday, January 20th marked the start of construction for the Bronx Delta School playground. Located in the Throgg’s Neck Community of the Bronx, the Bronx Delta School playground consisted of a bare and empty blacktop, without any play structures. "It's going to look beautiful," said Jayden, one of the second grade students involved in the project. Added classmate Eben, "There is going to be a basketball court, a tennis court, a track and a stage along with a flower garden." Jazlyn, another student shared, "When we have gym classes and have to jog, there isn't a track to run on, but when the new playground is done, we will have a real running track." Principal Maria Rogalle is going to get the New York Road Runners to start a running club for the students. "This renovation will be a huge benefit to hundreds of children since there are two middle schools in the building and we have a large after school population."

In February 2016 an Active Design Visioning Session, led by The Trust for Public Land was held with parents, students, and teachers to design the playground. Over the summer of 2016, with an Active Design Grant from Bronx Health REACH, Bronx Delta School organized a community gardening day where volunteers painted ground markings on the playground. Resolution A funding provided by City Council Member James Vacca and Bronx Borough President Ruben Diaz, Jr. will support the construction of the playground which, when completed, will have a running track, basketball courts, kickball space, a practice tennis court, a garden and a jungle gym.
at 11:58 AM