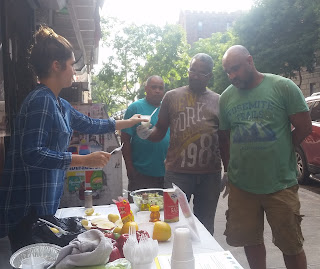 As a South Bronx native I have never associated bodegas with healthy food, and most people I know tend to associate bodegas with unhealthy snacks such as soda, potato chips and candy. To clear up some of the misconceptions that people have had that bodegas only sell unhealthy food, Bronx Health REACH, in partnership with the Bodega Association of the United Stated (ASOBEU), and the Hispanic Information and Telecommunications Network (HITN) has been holding healthy cooking demos at three of our healthy model bodegas.

Brito Deli, located at 309 Crimmins Avenue, hosted the first food demonstration. Although it was a rainy day, many people took part in the cooking demo. Pamela Di Gregorio, the community chef leading the food demonstrations, came up with a delicious and healthy recipe using items that can be bought at Brito Deli. She created a Southwestern Salad with a Lime Cilantro Vinaigrette, a recipe that featured low sodium canned black beans, tomatoes, red peppers, corn, lettuce and a delicious vinaigrette made from extra virgin olive oil, lime, cilantro and other ingredients. The salad was well received by the customers, and many of those who stopped by to sample it were surprised to learn that the salad was made from ingredients sold at the deli. Some customers remarked that they usually associated the bodega with unhealthy food, but were happy to receive and taste the Southwestern salad. 35 people tried the salad over the hour long demonstration.

Another healthy food demonstration took place at A & M Supermarket Deli, located at 1393 Webster Avenue. Pamela used the same Southwestern salad with a Lime Cilantro Vinaigrette recipe, but this time the food demonstration took place outside of the store to attract the attention of the neighborhood. The reaction from those passing by was very positive. People were excited to try the salad and loved that they were receiving a recipe along with the sample. Many people expressed the need for nutrition education and assistance in creating healthy dishes that are delicious and easy to prepare. The owner and staff of A & M Supermarket Deli also loved the salad and were helpful in getting skeptical customers to try the samples. Some customers who admitted not liking vegetables were pleasantly surprised to discover how much they enjoyed the salad. A total of 55 people tried the salad.

The food demonstration at La Bodeguita de Rosaura at 164 East 174th Street was also a success. 50 customers were surprised that a salad could be so delicious and filling. Customers expressed a need for nutrition education and ideas on how they could make healthy meals. The customers felt that although they knew that they needed to eat healthier, they did not know how to distinguish between healthy or unhealthy foods. The work being done with our healthy model bodegas can bridge that gap by providing nutrition education and recipes so people can make healthy dishes that not only taste delicious, but are nutritious as well.

After the positive responses and feedback from the customers who attended the healthy cooking demos, I believe that local residents can see bodegas as a place to purchase healthy foods. The Healthy Model Bodega Initiative aims to break the misconception that bodegas only sell junk food and will aid them in becoming healthier shopping destinations for the community. Please support our bodegas and look out for our next food demo, by following us on Instagram and Facebook.
at 7:04 PM