Reducing Obesity: Not Simple But Doable 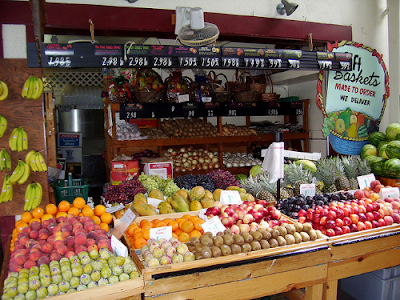 Photo via k lachshand
Eating these is one way to reduce obesity.

James R. Knickman President & CEO at the New York StateHealth Foundation  asked the million dollar question in his Huffington Post piece, “What's Workingto Reduce Obesity?” In his post Mr. Knickman reveals that researchers from Drexel University studied a range of experiments aimed at reducing obesity, assessing how effective those strategies were. Researchers concluded that measures such as improving sidewalks and banning trans fats had strong impact but other approaches such as restaurants posting nutrition information had very little, to no impact.

So what does work to reduce obesity?

- Seek out the economic and social benefits of interventions

- Success happens when communities and neighborhoods make it easy and affordable to be physically active and eat healthy foods, rather than one method such as banning trans fats

- All these healthy components add up to create “a neighborhood value, a point of pride” and becomes a part of the culture.

Mr. Knickman asks, “What is the best bang for your buck?” Here at the Bronx Health REACH Coalition we have launched the Towards A Healthier Bronx initiative using policy, systems and environmental improvements that increase access to healthy food, healthy beverages and opportunities for physical activity for over 75% of 675,215 residents residing in 12 high need South Bronx zip codes. Many public health campaigns rely heavily on clinical evidence, but fail to research the motivating factors relevant to that audience. To avoid this our campaign emphasizes actionable health behaviors.

Led by the Institute for Family Health, Bronx Health REACH was formed in 1999 to eliminate racial and ethnic disparities in health outcomes in diabetes and heart disease in African American and Latino communities in the southwest Bronx. Since then the Bronx Health REACH coalition has grown to include over 70 community-based organizations, 47 faith-based organizations, and health care providers. Bronx Health REACH serves as a national model of community empowerment demonstrating ways to build healthier communities by promoting healthy life-style behaviors.

The plan behind Towards A Healthier Bronx is:

Partnering with bodega, deli and restaurant owners by providing them with training and education makes these initiatives not only a healthy benefit for their customers, but an economic benefit for the business owner. Encouraging chefs to attend monthly trainings on healthy food preparation results in offering patrons 2 to 3 healthier menu options. As New York City neighborhood demographics change, the restaurants and bodegas can now more easily adapt to the healthy choices their new customers are seeking resulting in those restaurant and bodega owners seeing more customers come into their stores and restaurants and gaining more revenue.

Mr. Knickman also states, “So if menu labeling isn't working for the target population--as the Drexel research and other studies suggest--we need to find and test other ways to make the healthy choice the easy choice.” Euny C. Lee, Evaluator and Policy Analyst at Bronx Health REACH agrees with Mr. Knickman citing a New York University study, “Calorie Labeling Has Barely Any Effecton Teenagers' or Parents' Food Purchases” which revealed that posting calories for food items at fast food restaurants had no impact on what consumer purchased.
Euny has moderated several focus groups with our faith-based coalition members to determine which types of messages encourage healthy behavior such as healthy eating and physical activity. Findings reveal educating the community about daily calorie intake to be important as most were not aware that you should consume no more than 2000 calories a day to maintain a healthy lifestyle.
Messaging matters as well. Signs and posters promoting a health benefit rather than a scare tactic elicit more positive behavior changes. Interventions have to be customized to a specific demographic/ethnic group so that it is culturally and linguistically understandable and appropriate. Other results include social support such as having a friend or family member who you are accountable to for your actions to reach the desired health goals. 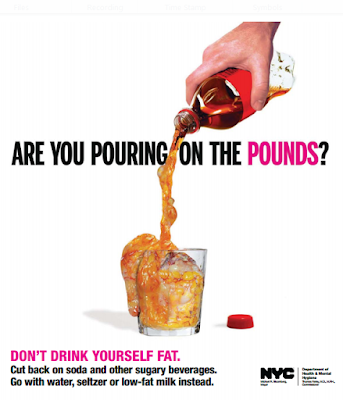 Focus group members felt this ad was not accurate saying the soda bottle should be bigger and would be more effective if other ailments such as diabetes and heart disease that causes stroke were listed. 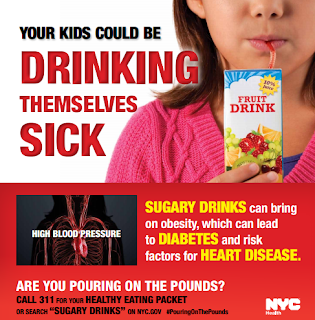 Focus group members felt the above ad was actually a real advertisement selling juice boxes and a better message would have been the child drinking from a water bottle.

But the question still remains. “What is doable in the fight to reduce obesity?” Bronx Health REACH can point to a few projects. A city wide campaign was created to serve only low-fat and fat-free milk rather than whole milk at New York City public schools. Bronx Health REACH educated policy makers, Coalition members and residents from the community about obesity and the benefits of reduced fat milk. This led to the New York City Public school system adopting the policy and impacting over 1.1 million children in 1,579 schools as well as a model for public schools in 15 other states.

I don't know if the day will ever arrive where the only thing one needs to do is take a miracle pill that sheds those excess pounds without any physical effort while drinking a large vanilla milkshake every day. What I do know is these healthy initiatives together will begin slowing the overweight/obesity epidemic we now face.
at 12:08 AM