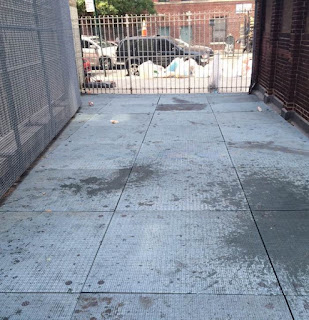 This small enclosure at a Bronx public school is considered to be an acceptable space for physical fitness.

The findings, to date, reveal that 75% of the schools surveyed have an indoor gymnasium space, and 17% of the schools surveyed lack a fully functioning playground. Disturbingly, only 8% of the schools are meeting the weekly physical education recommendation of 120 minutes for K through 12 students. The final findings of the assessment will be reported widely to staff, parents and students of District 9, as well as with community members and leaders. Bronx Health REACH will present the findings to the District 9 Community Education Council in September. As part of the report, Bronx Health REACH will propose solutions to improve those spaces with Active Design and broader policy recommendations.