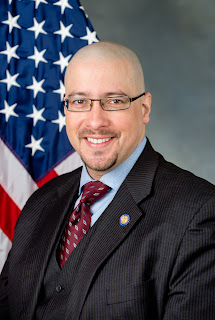 Bronx Health REACH continues its series on individuals who have made a significant contribution to not only the Institute for Family Health, but to the African-American, Black and Latino communities in the Bronx where they have been strong activists for needed change. A notable member of this group of change agents is Senator Gustavo Rivera, a New York state senator representing the 33rd Senate District, covering the Bronx neighborhoods of Kingsbridge Heights, Kingsbridge, Fordham, University Heights, Van Nest, Tremont, East Tremont, and parts of Morrisania and Parkchester.

You would think being a member of the New York State Senate would be enough of a commitment of time and energy, but to also publicly commit to shedding twenty pounds? That type of commitment was made by State Senator Gustavo Rivera. Elected in 2010 to represent Bronx District 33 in the New York State Senate, Senator Rivera was aware of the health disparities many Bronx residents faced in his district. "Dr. Christopher Malone, who had been my long-time policy director was doing research on District 33 in the Bronx, and it became clear that there was enough data, demonstrating that health was an issue impacting Bronx residents, not just in my District, but in the rest of the Bronx as well, and it needed to be addressed," says Senator Rivera.

One of the first steps Senator Rivera took after getting elected was introducing legislation that would impact the overall health outcomes of his constituency. "I asked to be appointed as the ranking member of the New York Senate’s Health Committee since health care issues not only in the Bronx, but across New York State interested me policy wise, and if I wanted to enact legislation, this was an important step for me to take on a leadership role in that Committee."

A recent legislative success he has championed is bill S779, known as the "Happy Meal Bill" that has passed the Senate Health Committee. This bill sets nutritional standards for restaurants distributing incentive items aimed at children. "The idea is simple, you have a ten year old child that wants one of the X Men toys that comes with the meal; that child is not thinking about the Big Mac, large fries, and super-size soda that comes with it, they just want the toy. We felt it was important that certain nutritional requirements in terms of the amount of fat, sugar, and caloric amounts be met when an incentive item is offered with a meal.”

Another bill Senator Rivera has been working to pass is a requirement for all sugar sweetened beverages sold in New York State have a warning label (Senate Bill S 6435 & Assembly Bill 2320-B). Unfortunately when legislation came up for a vote this past May, the bill failed to pass the Agriculture Committee. "It is rare for some pieces of legislation, when introduced, to be passed immediately. In this case, there are people who oppose the idea of labeling what they see as a benign product. Many do not understand that the reason the soda and fast food industry has had success in selling their products is that the salt, fat and sugar content go right to the pleasure centers of our brain - they make us feel good, but excessive consumption of sugar, fat, or salt causes serious negative health outcomes.”

Even though this bill has stalled for the moment, there has been some positive change since many fast food establishments are now under pressure to reconsider their food offerings. "McDonalds is now offering some healthy choices such as fruit and water with children's meals, and when one company starts doing that, all the others offer similar alternatives, creating smaller positive changes."

When Senator Rivera came together with Bronx Borough President Ruben Diaz Jr. in 2011 to form the Bronx CAN (Change Attitudes Now) Health Initiative, Senator Rivera decided to make a public commitment to lose weight. “I wanted to use myself as the model since I live in the same Bronx neighborhood as many of my constituents, and have the same access (or lack thereof) to healthy food options and places to exercise for free or low cost. Would I be able to lose weight and maintain a more healthy lifestyle given the choices in my community?” He lost 30 pounds back in 2011 but has since gained most of the weight back. “When I turned forty last November I had a small health scare which made me realize that the one thing I had not been doing on a regular basis was getting more physical activity, so I am committed to losing fifty pounds for this year by eating smaller portions and exercising on a daily basis.”

When asked what it would take to improve the Bronx ranking as the unhealthiest county in New York State, Senator Rivera replies, “From the Robert Wood Johnson Foundation County Health Rankings & Roadmaps report there is clear evidence that health disparities are directly connected to socio economic conditions. When you have consistently high unemployment rates, high poverty rates, food deserts, lack of access to fruits and vegetables as we do in the Bronx, all of these things are going to have a direct impact on the health and well-being of its residents. This is generational which means we cannot easily just snap our fingers and wish it away. However I believe with the work of the many community organizations partnering on Bronx CAN and other initiatives, combined with the work of elected officials, the needle can be moved.”