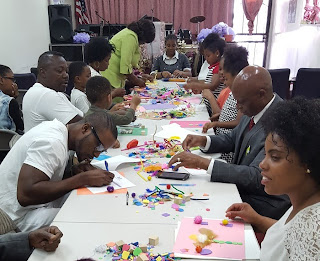 Recently, I led two visioning sessions for the Complete the Grand Concourse Initiative, which is an effort to bring life-saving improvements to the entire Grand Concourse with traffic calming measures, protected bike lanes, curb extensions, and dedicated bus lanes. The visioning sessions were held at two Bronx churches, who are partners in the Bronx Health REACH Faith Based coalition.

Visioning sessions are a great way to hear from the community about the concerns and improvements needed. Created by James Rojas, a visioning session involves a group of community members using objects such as small blocks of wood, string, artificial flowers, pipe cleaners etc. to design their ideal neighborhood/community. At both visioning sessions participants were instructed to use the material provided and design their community as they would like it, whether that was making streets safer, improvements to the parks or more places for physical activity in their neighborhood. 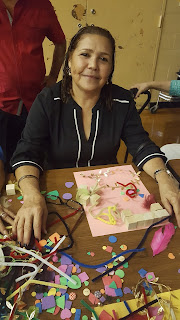 The second visioning session involved fifteen parishioners from Calvary Victory Bible Church including the Pastor of the Church and 8 children. At Calvary Victory Bible Church the first to share was a father and his four year old son, who I designated his special assistant. They had constructed what I thought was a basketball court, but was actually four camera poles that would be in their ideal park. They felt parks in the Bronx needed more lighting, and with increased lighting and surveillance the drug dealers would move elsewhere. The lighting would also help police with investigations. Another participant created a farmers market and a store that offered salads since she felt that did not currently exist in her neighborhood. One participant said that more community centers are needed with a focus on job training so young adults would stay off the streets. Another highlighted public safety, and would like to see more police involvement. Another participant went further by saying that since there are multiple ethnicities in her community, the police need to be trained better so they can be more welcoming to diverse communities.

I did not expect that racial inequality would be such a charged topic during the sessions. When I introduced the workshops I was expecting participants to focus on wider streets or on ways to improve the park, but those were not their immediate needs and wants.

Participants highlighted the violence and other public safety issues they face. Many feel unsafe when they visit their local parks and are afraid to bring their children because they see people smoking and breaking the law and do not want their children exposed to that. Being a Latina living in the Bronx, and, though, aware of the racial inequality that exists, because it is not part of my lived experience, I was caught by surprise that the issue of race was the big elephant in the room in both sessions. Many asked: “Why do we not have access to healthy food? Why is our rent increasing and we are being pushed out of our community? Why is gentrification happening?”

I strongly believe that real change can happen and Bronx Health REACH, along with our partners’ efforts, are addressing this head on. But it is a community effort, and many stakeholders must take action. The Bronx has a bright future, and even though eliminating health disparities is hard work, we should not grow weary in our efforts, but persevere. The #Not62-The Campaign for A Healthy Bronx! brings together Bronx community organizations and residents to eliminate health disparities. After holding these visioning sessions with Christ the King and Victory Bible Church members it is clear that community members must have a seat at the table and be actively involved in the decision making since they know best the problems and can offer solutions.