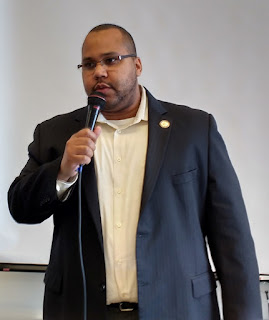 Bronx Health REACH continues its series on individuals who have made a significant contribution to not only the Institute for Family Health, but to the African-American, Black and Latino communities in the Bronx where they have been strong activists for needed change. A notable member of this group of change agents is New York Assemblymember Victor M. Pichardo, representing the 86th New York State Assembly District, which includes the University and Morris Heights, Mount Eden, Kingsbridge, Tremont, and Fordham sections of the Bronx.

Assemblyman Victor M. Pichardo became interested in public service following a family tragedy fifteen years ago. The Asemblyman’s cousin, who had been working as a livery cab driver, accidently bumped a motorcycle and the motorcyclist ended up stabbing his cousin to death. The suspect fled to the Dominican Republic. “It seemed like the case to get the guy that killed my cousin had stopped, so Senator Charles Schumer took an interest in the case and flew down to meet the President of the Dominican Republic to request extradition. Unfortunately word got around and the suspect then fled to Belgium. With the assistance of Senator Schumer, Interpol tracked down the suspect and he was later brought back to face justice. From that point on, I understood that government is, and should always be, a force for good.”

Assemblymember Pichardo's start in public service began as an intern for Senator Schumer, and eventually became the Community Outreach Coordinator/Latino Liaison. After taking a position at Mercy College, Pichardo discovered that public service was a better fit, and took a job as the Director of Community Affairs for New York State Senator Gustavo Rivera. In this position he saw the severity of health disparities faced by Bronx residents. “I have heard residents tell me, ‘My daughter is suffering from asthma, and I still have to wait three months to get an appointment,’ while others have confided that they are unable to get affordable cancer screenings and the only time they can get them is when a community health fair has them for free. But now with the Affordable Healthcare Act in place, health care must be provided to communities of all sizes, regardless of geographic and socio economic status, and individuals should receive the same equity of care in a timely matter.”

With the Bronx being ranked 62 out of 62 counties by the Robert Wood Johnson Foundation County Health Rankings & Roadmaps, Assemblyman Pichardo would like to turn around the negative stereotypes most people have about the Bronx. “It should not matter which zip code you were born in, you should be given and afforded the same resources and opportunities as anybody else in terms of jobs, housing, and education. Take the recent incidents of police brutality, which I feel has spiked in the last few years. Government has a responsibility to make sure that a young man of color, regardless of the neighborhood he lives in, be it the Bronx, Staten Island, Louisiana, or Minnesota, should be able to safely walk in his community, and not lose his life for an unfathomable reason.”

He adds, “People who feel more job and housing secure tend to be healthier overall, and their health outcomes tend to be better. We need to create sustainable safe communities with residents having gainful employment and affordable/stable housing. When that happens your mind is focused on taking care of your health, and the health of your family. The flipside is that being stressed out on things like a paycheck that won’t pay the rent and buy sufficient food, much less healthy food negatively affects ones health.”

Last April, when Bronx Health REACH held the #Not62 – The Campaign for A Healthy Bronx! Town Hall, the Assemblyman spoke to attendees after having spent an all-night legislative session in Albany to finalize the budget. He shared with the audience what he and the other Assembly members had been fighting for - a $15 minimum wage in New York State. “That $15 minimum wage means there is more money in the community for residents to purchase healthy fruits and vegetables, which means healthier outcomes, and that would be one of the first steps we can take to move from worst to the best, so the Bronx is no longer 62 out of 62.”
at 11:52 AM