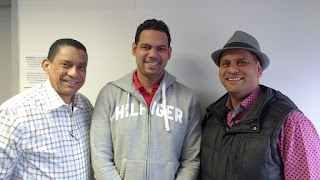 Bronx Health REACH in partnership with The Bodega Association and the Hispanic Information and Telecommunications Network (HITN) has created the Healthy Bodega Program, and through our two and a half year partnership we have gotten to know many of our bodega owners. At a recent meeting three bodega owners shared their humble beginnings in the Bronx, proving their long standing commitment to the community at a time when many businesses had fled, perceiving the place as hostile to businesses and residents alike.

Here are their stories:

"Back in the 1980's, the Bronx was torn apart. There were a lot of burned out and abandoned buildings, but we came to open our bodegas, and we gave life to those burned out and abandoned neighborhoods. I was 19 years old when I started in the Bronx. My brother owned a few bodegas and he wanted me to manage the one at 2588 Creston Avenue, a very tough neighborhood. A lot of marijuana was being sold in and around that bodega, and I am the type of person who was always against anything that had to do with drugs. The store was in the basement and at various times the dealers would not allow anyone to enter or exit the store."

"The first six months I stopped many people coming there to buy drugs because I had a business to run and would not allow this illegal behavior to continue. I told them, 'If you light up in my store, I am going to throw you out.' You could do whatever outside of the store, but do not sell drugs in my store. It did not matter how powerful they were. At the time my English was not very good, and the drug dealers said they liked me being a tough guy to them, but I did not understand what that meant. I guess you can say I was tough and dumb, but they respected me."

"The store closed two years later since it was not authorized to operate out of a basement, so I bought a store around the corner in partnership with my brother on 192nd Street and Grand Concourse, and we are still there to this day. Over time, the neighborhoods started to improve, and now you see families moving out of Washington Heights and settling in the Bronx."

"My uncles had a store on Watson Avenue in the Bronx, and my mom was working with my uncles. Watson Avenue ran through Soundview, and it was a very tough neighborhood back in the 1980's and 1990's. I heard stories of bodega workers getting killed in robberies, so I came to the United States because I wanted to get my mom out of there. Even though I had graduated from college with a degree in electrical engineering, when I arrived in the United States I opened a small store. I had many people coming to my store. Other owners heard about my success and eventually sold me their businesses."


"From 1985 to 2005, there were big problems in the Bronx. At my first store in 1985, the counter was all bullet proof glass to protect my employees. Over time, along with the New York Police Department, we were able to clear out the drug dealers, and the neighborhood changed for the better. My customers trusted me to leave their house keys at my bodega for their children to pick up after school. My bodega became a community center that brought neighbors closer together. I sold that store 15 years ago, but I still return to visit as many of my customers, who are still in the neighborhood, remember me."
at 4:47 PM