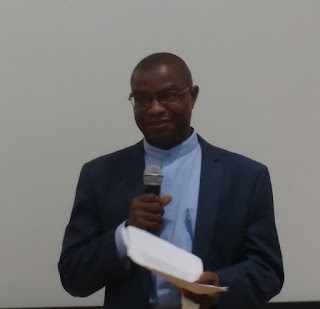 Bronx Health REACH continues its series on individuals who have made a significant contribution to the Institute for Family Health's Bronx Health REACH, and have also been strong activists for needed change in the Black and Latino communities in the Bronx. A notable member of this group of change agents is The Reverend John Udo-Okon, Senior Pastor at the Word of Life International in the Bronx, New York, and a partner in the Bronx Health REACH faith based outreach initiative.


The Rev. John Udo-Okon's first Bronx location for his church, Word of Life International, was the size of a living room. In fact, it was his living room where his parishioners gathered in the one bedroom Bronx apartment he shared with his family. Born and raised in Nigeria, Pastor John worked with missionaries from the Sudan United Mission-Christian Reformed Church in Northern Nigeria to develop Christian shows for television and film productions in Nigeria. In 1998 Pastor John took a two year sabbatical from his work in Nigeria to spend time with his wife, Rev. Felicia Udo-Okon, who lived in United States. He lived in the Bronx intending to return to Nigeria after his sabbatical, but , as Pastor John puts it, “God had other plans for him.”

“I was praying and talking to other people of faith, and I was thinking of starting a ministry in the Bronx, but I kept asking myself, how do I start it? Then I heard a voice, ‘Start where you are.’ We were living in a one bedroom apartment on the fourth floor, and I was convinced that God wanted me to start a church in the apartment, so I told my wife let’s turn our living room into a church. Neighbors began attending every Sunday."

After seeing many people visiting the apartment, a neighbor informed Pastor John that he could not have people coming to his house for church every Sunday; “If you want to have a church, you need to find a larger space.” So Pastor John began to pray, and again, he heard a voice: “Go to White Plains Road by 214th Street.” He went to White Plains Road and 214th Street, and as he was standing on the corner a man came up to him and asked if he was looking for a space for his church. Pastor John was led to 3636 Holland Avenue, which became the new location for Word of Life International. Even though he now had a larger space, the area was drug infested. “Gun shots could be heard during services and drug dealers would run into the church and leave their drugs behind. The parishioners became wary of the new location. So we began to go out into the neighborhood and stand on the street corners along with the drug dealers and talk and pray with them. Eventually the drug dealers moved on, and after a few months with police involvement, the area became drug-free." 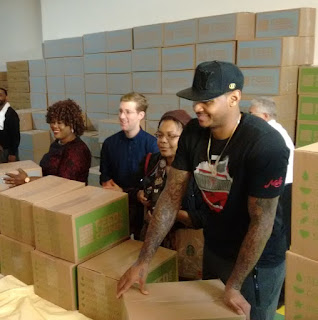 As his congregation grew Pastor John moved Word of Life International to 1299 Louis Nine Boulevard in the South Bronx. One day, as he was driving with church members along Park Avenue he saw a well dressed man looking for something in the garbage can. "I said to my wife, look at this man - he is looking for drugs.”  My wife said, ‘No, that man is hungry.’ “We began to argue, and just to prove my wife wrong, I parked and went up to this man and asked if he was looking for something in that trash can. The man told me that he was hungry and looking for food. I gave him $5 dollars to buy food, and we decided to turn our church into a food pantry." At first Pastor John and his parishioners would donate food from their own homes. Eventually they organized and collected food donations from local restaurants, grocery stores and other food banks. The program currently serves up to 8,000 people each month. Other services offered by Word of Life International include a fitness and nutrition education program as well as a senior wellness program for those 55 and older that meets every Thursday.

So what is his secret for reaching so many in the community? "It's not the size of your congregation, but how you respond to the needs of the community. Whatever you do for your community eventually will benefit you. The community members we have helped joined our congregation because of the work we did for them and others. Some of them came in as volunteers, fell in love with the work we were doing, and today they are worshiping with us.”

Pastor John continues to strengthen his network of volunteers every day, whether it is from the youth that have put in over 6000 community service hours to the partnership with other Bronx churches, where he mentors four other churches in Bronx Health REACH’s faith based initiative. A few days prior to Thanksgiving he received a call from a former parishioner currently living in Baltimore. The parishioner asked if it was possible for Word of Life International to help out Baltimore residents in need. “I filled a van with food the day before Thanksgiving, and it was delivered to hungry Baltimore residents.” To Pastor John, caring for the needy is not limited to just the Bronx, nor to those inside the church. “The time has come for us to get out of the church, get out to the streets and do something because at the end of the day, the best way to preach the gospel is to lift somebody up.”