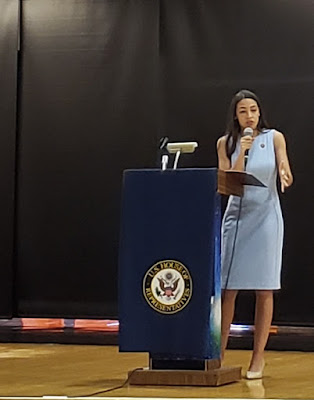 On Saturday, June 29th, Congresswoman Alexandria Ocasio-Cortez held a community town hall at P.S. 175 on City Island, and Bronx Health REACH's Charmaine Ruddock and Kelly Moltzen joined 200 other people to hear what the Congresswoman is doing to address issues facing Bronx residents. She spoke about some of the ideas she has been championing: the Green New Deal, single payer healthcare and making healthy food more affordable.

Congresswoman Ocasio-Cortez pointed out how the Parkchester farmers market is only open a few months out of the year, compared to other farmers markets in the city that operate year-round. She said that local residents should be encouraged to grow their own food. Charmaine had a chance to ask Congresswoman Ocasio-Cortez what she is doing to address the fact that the Bronx is ranked 62 out of 62 in all New York State counties in terms of health outcomes and health factors. Charmaine followed up her first question by also asking the Congresswoman, how is she prioritizing the Bronx in light of that standing.

PIX11 was at the town hall and interviewed Charmaine. 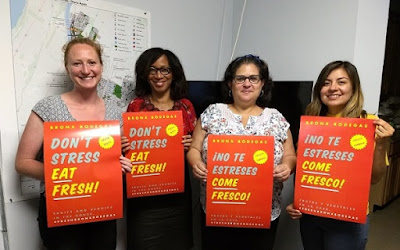 In June, staff from Bronx Health REACH and BronxWorks met with Council Member Diana Ayala and her Deputy Chief of Staff, Bianca J. Almedina. Council Member Ayala had visited Los Hermanos, one of our partner bodegas participating in the Don't Stress, Eat Fresh campaign. Bronx Health REACH received $2500 in funding from the City Council to continue the campaign. At the meeting Council Member Ayala offered suggestions on how best to go about securing future City Council funding to support the marketing campaign in 2020
at 11:36 AM