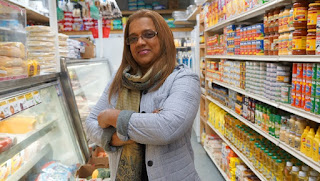 Hylonkys LaChapelle, owner of Gerard Minimarket is participating in the Healthy Bodega Initiative.

The January 30, 2016 issue of El Diario featured an article about the Healthy Bodega Initiative, a partnership between Bronx Health REACH, The Bodega Association of the United States (ASOBEU), and the Hispanic Information and Telecommunications Network, Inc. (HITN). The article featured the owner of Gerard Minimarket, a bodega that participated in the August training, and featured conversations with  Bronx Borough President Ruben Diaz Jr., ASOBEU President Ramon Murphy, and Bronx Health REACH Director Charmaine Ruddock.

Hylonkys LaChapelle, the owner of Gerard Minimarket located at 740 Gerard Avenue, Bronx, New York spoke of making changes to her bodega after attending the August training. She described re-arranging and moving the best looking apples and bananas to more prominent areas of shelf space.  The result is shoppers purchasing more fruits. “Now, two boxes of bananas (approximately 30 pounds of product) is sold in a matter of a day,” said LaChapelle.

Bronx Borough President Ruben Diaz Jr. spoke about the #Not62 campaign (the Bronx is ranked as the least healthy of 62 of 62 counties in New York State) and how those healthy bodegas that participated in the August Healthy Bodega Training will now be a “part of the solution offering healthy alternatives to their customers.”

Charmaine Ruddock, Director of Bronx Health REACH provided background on how the training program emphasizes the importance of including healthy alternatives at the deli counter such as low fat cheese and low fat mayonnaise in sandwiches, and water offered rather than soda.

You can read the full article here.

The next two- day Healthy Bodega Training will be held on March 8th and March 9th from 5 to 9:30 p.m. If you know a bodega in your community that would benefit from this training, please contact Zulay at the Bodega Association at (212) 928-0252.
at 6:20 PM