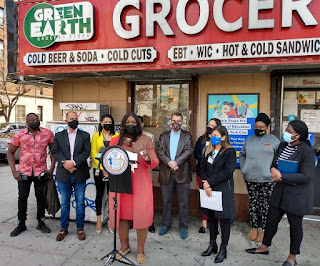 Council Member Vanessa L. Gibson and others call for an expansion of the Healthy Bodega Program.

We were encouraged when in April, Bronx Health REACH, BronxWorks, the Bodega and Small Business Group joined Councilmember Vanessa L. Gibson calling for an expansion of the Healthy Bodega program. This call came on the heels of an understanding at the time that proposed legislation was being drafted that would create a license for bodega owners who attended trainings on best practices to become a H.E.R.O. bodega (healthy, educated, responsive, and operational).

We have subsequently learned that the proposed legislation has hit a roadblock and there is currently no sponsor nor continued drafting. Disappointed? We certainly are.  Have we given up hope?  Absolutely not. We will continue to work with the Bodega and Small Business Group, food advocates and our legislators to create a business environment that will support the selling of healthy foods in bodegas in the Bronx and across the city.

In 2015 Bronx Health REACH partnered with the Bodega Association of the United States (renamed the Bodega and Small Business Group) and its ally, the Hispanic Information and Telecommunications Network, Inc. (HITN) to launch its revamped Healthy Bodega Initiative which had been initially created more than a decade before to address the obesity epidemic plaguing the Bronx’s most vulnerable neighborhoods.

“There’s no denying that there’s a strong correlation between the lack of access to healthy foods and increased health risks in our community,” said Councilmember Gibson. “I fully support an expansion of this program because it empowers and enriches our bodega owners, many of who are immigrant entrepreneurs who have disproportionately been affected by COVID-19.”

“We need our leaders to come together to support this initiative and help our community,” said Frank Marte of the Bodega and Small Business Group. “One day we can say the Bronx is one of the healthiest counties in New York State.”