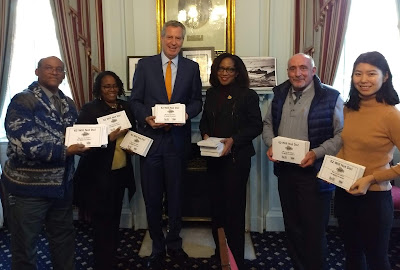 Members of the Bronx Health REACH Health Disparities Workgroup presented Mayor Bill de Blasio with over 2000 signed postcards from Bronx residents urging elected officials to make the health of the Bronx a priority.

On Monday, November 25th, members of the Bronx Health REACH Coalition’s Health Disparities Workgroup met with Mayor Bill de Blasio to discuss the need for his administration to prioritize the Bronx in light of its persistent last place ranking in health outcomes among New York State’s 62 counties. The Coalition asked the Mayor to ensure that his Administration makes the health of the Bronx a top priority at all levels and in all sectors of New York City’s government, including healthcare, housing, economic development, education, transportation, etc. To demonstrate the broad concern about this problem among Bronx residents, Bronx Health REACH Project Director Charmaine Ruddock and two members of the Health Disparities Workgroup presented the Mayor with over 2,000 signed postcards from Bronx residents.

For the past ten years the Robert Wood Johnson Foundation and the University of Wisconsin have released the County Health Rankings & Roadmaps Report that measures health outcomes and contributing factors such as education, employment, income and the environment, all of which contribute to the community’s health and the quality of life of its residents. The 2019 report ranked Bronx County 62 out of the 62 counties in New York State, as it has in each of the previous 9 reports. Presently the health ranking of the other four counties/boroughs of NYC is: NYC/Manhattan (5); Queens (8); Brooklyn/Kings County (17); Staten Island/Richmond County (28). All four had their rankings improve from last year. Not so the Bronx.

At the meeting, the Bronx Health REACH representatives asked the Administration to create a task force to identify and address the factors that continually keep the Bronx ranked as the unhealthiest county; have all New York City agencies make the Bronx a funding priority; and appoint a liaison from the Mayor’s office to work with the #Not62: A Campaign for a Healthy Bronx! 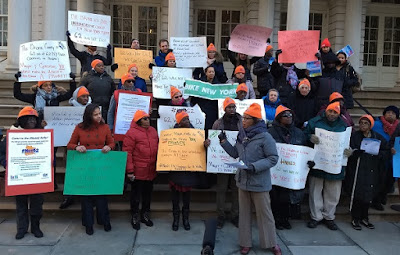 Over 50 people attended a #Not62 Rally on the steps of New York City Hall to demand that New York State elected officials make the health of the Bronx a top priority at all levels and in all sectors of government.

On Tuesday, December 3rd over 50 people gathered for a #Not62: The Campaign for a Healthy Bronx! rally on the steps of New York City Hall. Community leaders from several Bronx based community groups and Council Member Vanessa L. Gibson joined the rally to ask the Mayor, the Bronx Borough President, City Council members and New York State elected officials make the health of the Bronx a top priority.

“The Bronx Health REACH Coalition and its many partners and collaborators have been working hard to ensure that Bronx residents have all the opportunities they need to be healthier,
but we can only do so much. If the Bronx is to no longer rank dead last in all New York State counties in health outcomes, the health of its residents must become a top priority of the elected leadership of New York City and New York State and the entire Bronx community,” remarked Charmaine Ruddock, Project Director for Bronx Health REACH.

Dr. Neil Calman, President and CEO of the Institute for Family Health, which has led the Bronx Health REACH Coalition since 1999, stated, “It is critical that the state and the city work together to address social determinants of health – housing, education, and employment – in order to make real, sustainable changes in the health of the community.”

“Though progress in the Bronx has been made to address the health disparities that persist, much more work remains to be done,” said Council Member Vanessa L. Gibson (Bronx, District 16). “The Jerome Avenue Public Health Taskforce will be releasing a report examining the social determinants of health along Jerome Avenue. By focusing on housing, economic development, public outdoor spaces, healthcare quality and access, and our local food environment, this report will highlight the many ways we can collaborate on all levels of government as well as through local community partnerships to turn the tide on the overall health of our community, and the Bronx as a whole.”

“Year after year, the Bronx ranks 62 out of 62 in health outcomes – the result of a myriad of factors, including air and water pollution, insufficient access to safe and affordable housing, and a lack of access to quality healthcare,” said State Senator Alessandra Biaggi (D-Bronx/Westchester). “If we want our laws to reflect our promise to keep New Yorkers healthy, we must create comprehensive, health coverage for all and pass the New York Health Act. We must prioritize the Bronx at both the state and city level – by putting the Bronx at the top of the list we can start to reverse the trend, and improve health outcomes for Bronxites.”

In 2014 #Not62: A Campaign for A Healthy Bronx! was launched by the Bronx Borough President, the Bronx District Public Health Office, the Institute for Family Health/Bronx Health REACH, and Montefiore Health Systems, Inc. as a direct response to the ranking.

As a founding member of #Not62: A Campaign for a Healthy Bronx!, the Institute for Family Health/Bronx Health REACH Coalition is proud of its efforts to serve as a model of community empowerment that demonstrates how to build healthier communities. We do this by promoting primary prevention through health education; and advocating for the necessary policy, systems and environmental changes that leads to a transformed community that supports health and wellness. 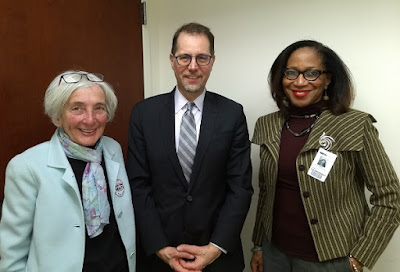 On December 18th, Charmaine Ruddock and Barbara Estrin from the Bronx Health REACH Health Disparities Workgroup met with Council Member and Chair of the Council Committee on Health, Mark Levine. We spoke with Council Member Levine about the  #Not62: A Campaign for a Healthy Bronx! He offered suggestions on how best to go about securing future City Council funding to support the Campaign.