We Have a Responsibility to Make our Streets Safe for All 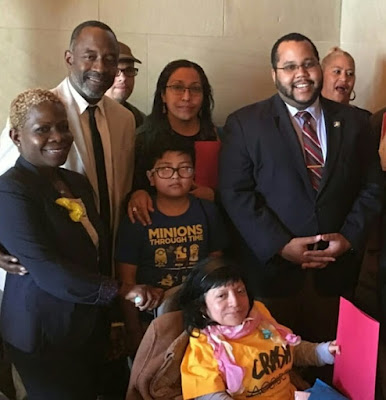 This post was written by James James, coordinator for the Claremont in Motion bike program, a partner of Bronx Health REACH.

As the coordinator of the Claremont in Motion bike program and a longtime advocate for safe streets, the chance to participate in Lobby Day with Transportation Alternatives and Families for Safe Streets, might seem like a routine endeavor that I’ve experienced a number of times over the years. And, while I’ve been to Albany with a number of organizations in the past, to lobby for women’s issues, education issues and safer streets, this lobby day presented me with an unexpected perspective on how we view safe streets in the context of transportation safety and the Mayor’s Vision Zero initiative.

On Wednesday, May 9th I boarded a bus at the Bronx County Courthouse with members of Transportation Alternatives and Families for Safer Streets for our trip to Albany. For anyone who’s been to Albany to advocate for legislation, this wasn’t your typical lobby day. While, the day was filled with your usual legislative staff meetings and photo ops with rushed legislators, the most poignant part of the day for me was hearing the heart wrenching stories of families that had to deal with the death of a child due to the lack of speed safety cameras in school zones. In New York City being struck by a vehicle is the leading cause of injury-related death for children under 14. In addition, vehicles seriously injured or kill a New Yorker, on average, every two hours. That is why this issue is so important.


Throughout the day, as we lobbied legislators on both sides of the issue, it became clear that there were some views that would not be swayed regardless of the discussion around the death of a young child in such an untimely fashion. It’s at this point that we all must find a sense of responsibility for the safety of our streets. The proposed bill would expand the number of school zones operating speed safety cameras from 140 to 290. It’s time to pass this legislation and follow the suggestions of the Mayor's Vision Zero Initiative and New York Police Department police commissioner and support passage of this law. Unfortunately, as the New York State legislative session ended, and the bill did not pass. I, along with the many organizations, advocates and elected officials are disappointed, but we'll be back next year to support safe streets for our children. I hope you'll join us.
at 1:53 PM