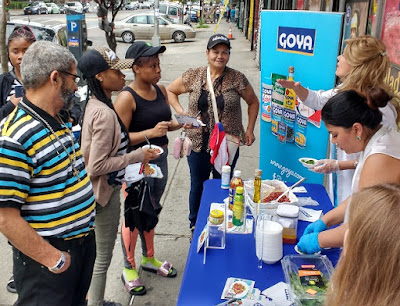 Goya Foods, in partnership with Bronx Health REACH, the Hispanic Information and Telecommunications Network, Inc. (HITN) and the Bodega Association of the United States (ASOBEU), provided free taste-tests to bodega customers at four Bronx bodegas, as part of their launch of Goya's 'Better for You' low sodium products in the Bronx. The cooking demonstrations and taste-tests took place August 1 to 4.

A Caribbean Red Bean Salad made with Goya's low sodium red kidney beans along with other Goya products was offered in taste tests to all passersby. Many enjoyed the delicious salad and were given the recipe to prepare at home. After seeing and hearing about the positive reception from the four cooking demos, Goya Foods has committed to working with the rest of the model bodegas to providing taste tests, and training for bodega owners and staff, who offer prepared food at their bodegas, to prepare these healthy and delicious low sodium dishes for their customers to purchase.
at 6:56 PM