Pastor Robert L. Foley Sr. – From Civil Rights’ Marches of the 60s to Championing the Cause of Eliminating Racial and Ethnic Health Disparities in the Bronx. 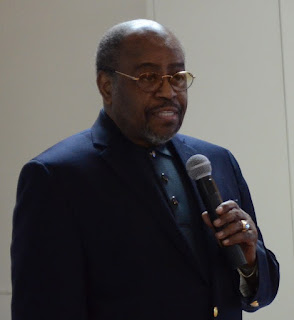 Bronx Health REACH continues it’s series of individuals that have made a significant contribution to not only the Institute for Family Health's Bronx Health REACH, but have been strong activists for needed change in the Black and Latino communities in the Bronx. A notable member of this group of change agents is Pastor Robert Lewis Foley, Sr., D. Min, D.D. Pastor of Cosmopolitan Church of the Lord Jesus in the Bronx, New York. Rev. Foley was raised in Georgia, graduated from Morris Brown College in Atlanta, and received a master of divinity degree from the Interdenominational Theological Center in Atlanta, and a doctor of ministry degree at Drew University in Madison, New Jersey.

Pastor Robert Lewis Foley, Sr. was born in Marietta, Georgia. His father had been a pastor serving several congregations in Georgia and Birmingham, Alabama and would become an influence on Pastor Foley's decision to enter the Christian ministry in 1956 and a pastor himself in 1962. After becoming a pastor in Atlanta, Georgia, Pastor Foley became involved in the civil rights movement by attending meetings in Atlanta with  Dr. Martin Luther King, Jr.  and Dr. Ralph Abernathy,  participating in events with Julian Bond and Stokely Carmichael, and marching  from Selma to Montgomery. At the time Pastor Foley did not realize that working with and marching alongside these historical civil rights leaders would put him on the path to becoming a community leader and providing a voice for underserved communities. "During the time of my involvement with these civil protests, I had no idea that what we were doing would have the impact on this nation that became the reality. I did it because I thought it was the right thing to do, and now I realize it is part of the reason God sent me to this world," says Pastor Foley.

While attending the ITC Seminary in 1965, he married and continued his pastoral ministry in Atlanta. In 1967, after a meeting with the late Bishop John Bright (the leader of all the New York based AME churches), Pastor Foley was transferred to New York where he continued his pastoral ministry in Tuckahoe, New York and in Harlem. After a few years, he decided to organize and establish an independent church. The first worship service of this new church named Cosmopolitan Church of the Lord Jesus, took place at a Prince Hall Masonic Lodge in Manhattan, and the next several services of worship were held in the auditorium of a public school also in Manhattan.

As fate or more likely providence would have it, a colleague of Pastor Foley spoke to him about a realtor who had placed an advertisement regarding a church building for sale in the Bronx, New York. The owner of the Bronx church invited Pastor Foley and his congregation to hold a service in the space, and soon after accepted an offer to purchase the church. At first Pastor Foley was uncertain if the congregation would be able to pay the mortgage, but soon discovered his congregation wanted to stay permanently. “We never missed a payment on the mortgage and retired that 18 year mortgage in 16 years, even though many of our members at that time were retired senior citizens living on a fixed income,” says Pastor Foley, and he continues to serve this congregation after 38 years.

In 1999 Joyce Davis and Maxine Golub from the Institute for Family Health met with Pastor Foley as the Institute for Family Health was launching a community coalition whose goal was the elimination of racial and ethnic health disparities in the South Bronx. A special emphasis of the soon to be formed coalition was to focus attention on the discrimination and health disparities in health services provided by many of New York City’s teaching hospitals. "They gave an overview of how widespread the problem was, and it was an eye-opener for me since I was not aware how large and devastating health disparities were, and seeing how the minority communities were not being properly attended to by the medical community motivated me to join," says Pastor Foley.

Pastor Foley continues to be an active participant in many Bronx Health REACH initiatives. He not only graciously provides his church as a monthly meeting place for the Health Disparities Workgroup, but Cosmopolitan Church of the Lord Jesus has been host to several of Bronx Health REACH’s pastors breakfasts.  The most recent event was the hosting of a meeting of local elected officials and clergy leaders to address the Bronx being ranked 62 out of the 62 New York State counties in health outcomes and health factors in the Robert Wood Johnson’s County Health Ranking Report.

The pulpit is the one place Pastor Foley believes he has the most influence. "Every week I try to say something that speaks to the importance of maintaining your physical and mental well-being. Maintaining a healthy lifestyle is an extension of our ministry, and the church must maintain relevancy to the community if we are to serve effectively and meaningfully," says Pastor Foley. Additionally, he serves as a member of the Community Advisory Board of Montefiore Hospital, the Advisory Board of the Bronx Region of the American Cancer Society, the New York Yankees Community Relations Council, and the Police/Clergy Liaison of the NYPD.
at 7:59 AM