The Price We Pay for Cutting Gym 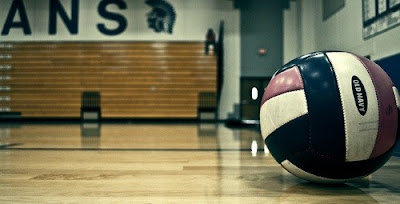 - 41 percent of high schools have no physical fitness space

- 35 percent of middle schools have no physical fitness space

- 91,000 students attend a school that does not have access to an outdoor school yard or nearby park

Bronx Health REACH’s school wellness program, Healthy Schools NY, works with 22 Bronx schools involving school staff, parents, and administrators to change policies and practices on nutrition and physical activity. One of the goals is to achieve the New York State-mandated 120 minutes of physical education per week. When children engage in school-day physical education, results can be seen in improved academic classroom performance such as better concentration, attentiveness and success in the classroom.

This is not the first time a New York City Department of Education audit has been conducted by the NYC Comptroller. A 2011 NYC Comptroller audit revealed that 100 percent of 31 elementary schools examined (at the time) were out of compliance with State PE regulations. A 2001 study conducted by a local non-profit group in partnership with the NYC Board of Education analyzed 391 schools (one third of the New York City public schools in the system that year) and concluded that “physical education [was] among the last areas of the New York City school system to recover from the fiscal crisis of the mid-1970s” and had been “persistently undervalued” and “sacrificed to the push for academic achievement, despite research showing that organized sports and physical fitness improve children’s performance both academically and socially.

So here we are in 2015 and the problems still persist. Spaces for physical education in the schools disappeared as the Board of Education converted gyms and school yards into classrooms and parking lots, permitting athletic facilities to fall into disrepair. Lack of accountability can be traced back to the New York State Education Department failing to enforce its own regulations around physical education. When asked by the Comptroller's Office, State officials responded that they “counted on local school districts to monitor their own compliance.” Without full and complete data the Comptroller’s Office was not able to do a complete analysis of whether New York City schools are meeting New York State physical education instructional time requirements or contractually agreed-upon class size mandates.

According to Department of Education data, 2,216 full-time, licensed Physical Education teachers at general education schools are assigned to 1,072 schools leaving 506 schools citywide (over 32 percent) without a fulltime, certified PE teacher. A parent speaking to the New York Daily News stated, "All our kids are dealing with health and weight issues," said Synthia Bachman, 42, a programmer from Manhattan whose son attends the Children's Workshop School in the East Village. Kids and parents at the Children's Workshop School said the school has no gym. Students said they use an adjacent playground for exercise when the weather is good and the school's lobby for gym class in the winter." Yes, you read that correctly. The school’s lobby is being used as a gym. 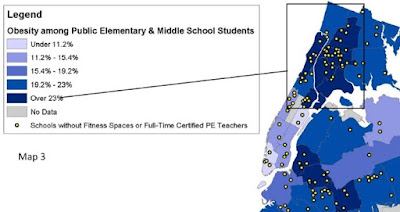 With that in mind the Comptroller recommends the following:

- Update the New York City Department of Education’s District Physical Education Plan, submit it to NYSED and post a copy on the DOE website

Lack of physical education in New York City public schools over the long term wreaks economic havoc as children become adults. In New York City alone, obesity is projected to cost the City over $4 billion in health care expenses annually. Eventually we all end up paying these costs that can easily be prevented by holding those accountable and meeting physical education mandates for every school that will improve the health and well-being of all New York City children.

Images used above by NYC Dept of Education, Citizens' Committee for Children used in the Stringer report, “Dropping the Ball: Disparities in Physical Education in New York CitySchools.”
at 11:25 PM