This week, Council Member Torres announced funding for an innovative program to promote healthier choices for Bronx residents. HealthBucks is a program facilitated by the Department of Health, where coupons offering $2 toward fruits and vegetables from farmer's markets are distributed through local organizations to residents. Council Member Torres has allocated $10,000 towards HealthBucks for his District and is the first member of the City Council to fund this program. 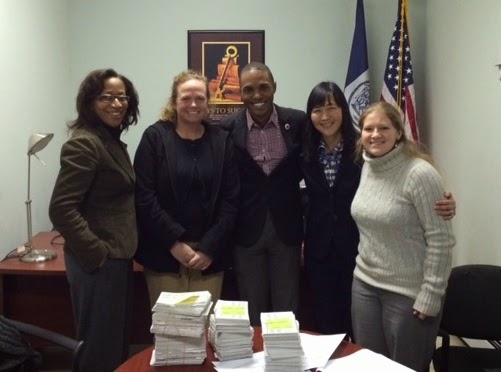 “The neighborhoods I represent in the Bronx face serious health issues. Seniors with diabetes have a death rate more than double that of New York City. The childhood obesity rate is the highest in New York City. Two-thirds of residents are overweight or obese,” said Council Member Torres. “I am proud to announce an unprecedented investment of $10,000 in the HealthBucks program, which increases access to fruits and vegetables for residents, particularly for low-income residents. The HealthBucks program is a momentous step in addressing public health concerns in my district and citywide”. 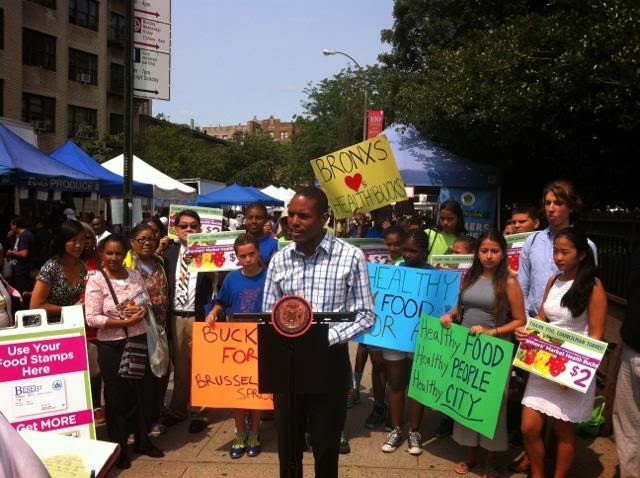 Karen Washington, a member of the Mary Mitchell Family and Youth Center, spoke about the importance of Health Bucks in supporting fresh, affordable food that community members can buy from local farmers. “Fresh food should be a human right, not a privilege for some,” said Karen, who also happens to be a recipient of this year’s James Beard Leadership Award, which recognizes visionaries in the world of food politics and sustainable agriculture. 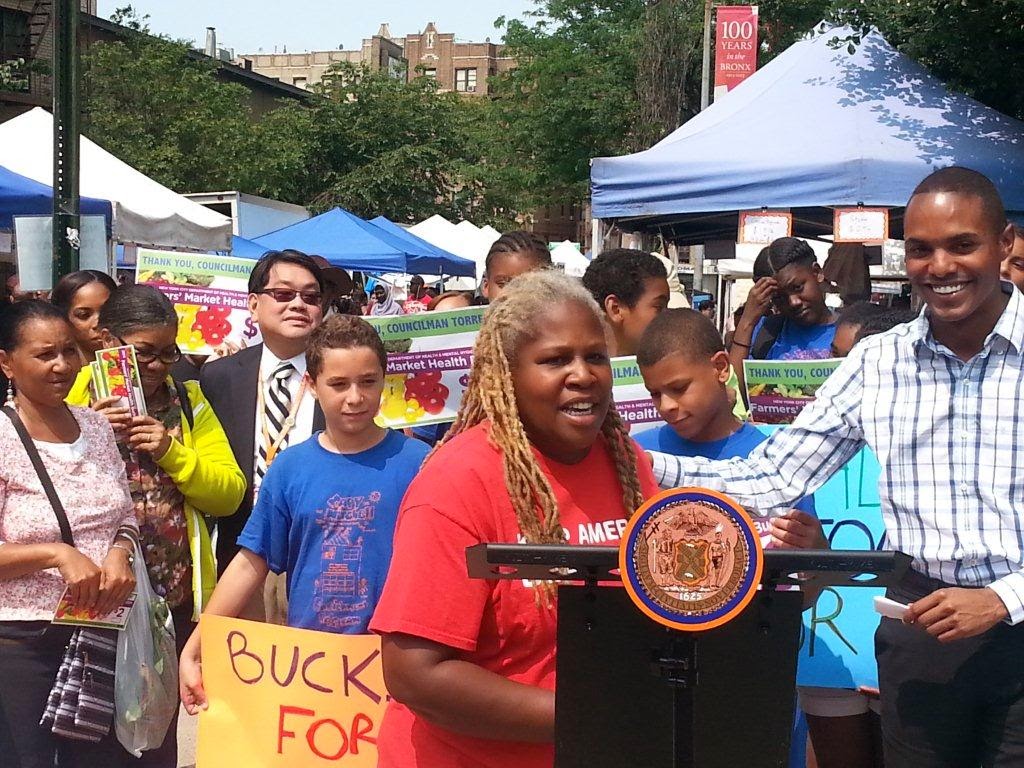 “Health Bucks will make a real difference in this community by connecting the dots between healthy food, healthy New Yorkers and a healthy environment,” said Marcia Bystryn, President of the New York League of Conservation Voters. “Thank you, Council Member Torres, for making today’s victory possible. And thank you to the thousands of Bronx residents who stood up and made their voices heard. Together, we are building a more just, equitable and sustainable city.”


“We applaud Council Member Torres for his support of our Health Bucks program and hope that other members of the Council will follow his lead,” said First Deputy Commissioner of Health Dr. Oxiris Barbot. “Increasing access to fruits and vegetables by making them easier to afford is one way we can help give New Yorkers healthier options, particularly in the Bronx which has high rates of obesity.”


“Council Member Torres’ unprecedented securing of $10,000 from the City’s 2015 budget for HealthBucks in District 15 represents a significant win for the many residents who indicated that being able to afford to buy fresh produce in their neighborhood farmers markets was very important to them.  With the Bronx having some of the highest rates of diet-related diseases such as obesity and diabetes in New York State, these HealthBucks will go a long way to making fresh fruits and vegetables more affordable for Bronx residents,” said Charmaine Ruddock, Project Director for Bronx Health REACH.


“We know that individuals that shop at farmers markets have a greater intake of fresh fruits and vegetables. Health Bucks play a critical role to ensure that all New Yorkers have access to the freshest, healthiest food available, as well as provide crucial income to regional farmers. Last year almost $1 million dollars was spent in SNAP at our Greenmarkets, thanks in part to the $2 Health Buck incentive. We are very thankful to Council Member Torres for earmarking this money for an important win-win program that has value not only in promoting the health of participants but also the preservation of our local farming community,” said Michael Hurwitz, Greenmarket Director for GrowNYC.
“In working with our patients at Union Community Health Center, the hardest part is changing behaviors. Resources like Health Bucks are an innovative way for us as providers to get patients to try new fruits and vegetables that they never would have considered. Further, Health Bucks provide an opportunity for communities to not only support our local economy, but also help level the playing field with those big businesses which promote processed foods,” said Doctor Nelson Eng, Chief Medical Officer at Union Community Health Center.
Data from 2009 shows 17.2% of New York City residents in low-income neighborhoods reported eating no fruits and vegetables on the preceding day, compared with 8.0% of residents in high-income neighborhoods (CDC). Farmers markets, which are located in several locations in the Central Bronx, provide a promising venue to decrease this disparity.

Health Bucks is an added incentive to SNAP recipients. For every $5 in EBT purchases, qualifying consumers receive an additional $2 in HealthBucks. Data from the CDC shows that the Health Bucks program leads SNAP recipients to shop at farmer’s markets with more frequency, due to the incentive the program offers.

Here is some press coverage of the HealthBucks announcement: