Farm to Table: Supporting CSAs in Our Community

Not too long ago having access to farm fresh produce in urban areas meant driving upstate and picking apples or paying high prices at gourmet grocery stores. But the recent advent of Community Supported Agriculture (CSA) programs, which have been popping up throughout the Bronx and other underserved communities, are now bringing the farm to the city. CSAs give communities direct access to high quality, fresh produce grown by local farmers, who bring their wares to a designated drop-off site once a week for a reasonable cost. Participants buy a farm share, usually enough for a family of four, and can often use food stamps or pay on a sliding scale depending on income. At last count, there were approximately 12,000 CSAs in the U.S. and 350 in New York State alone.
The growing importance of CSAs in urban areas and food deserts (discussed in a recent blog post here) is underlined by the introduction of the Community Supported Agriculture Promotion Act by Senators Gillibrand, Leahy, Sanders, and Tester. This proposed legislation would create a competitive grant program within the U.S. Department of Agriculture (USDA), which would award federal funds to support new and current CSA farmers, develop innovative methods of delivery and distribution, and promote participation through outreach and education activities. The program would give preference to CSAs that expand their reach into food deserts or low-income communities.
This legislation is good news for fresh food advocates, who have been working to connect farmers with community members in underserved areas. Bronx Health REACH has been an active partner in supporting CSAs throughout the community and provided funding to the NYC Coalition Against Hunger to start a Bronx-based CSA that brings produce from Fresh Radish Farm in Goshen, NY to the Seventh Day Adventist Temple on the Grand Concourse in the Bronx. Kelly Moltzen, Bronx Health REACH’s nutrition coordinator, is a member of the South Bronx CSA and recently visited Nolasco Farms in Sussex County, New Jersey where she learned about the 50 kinds of produce grown on the farm (see photo below). If you’re interested in joining a CSA or starting one in your neighborhood, the organization Just Food keeps a running list of CSAs in New York City and provides information to people interested in starting a program. 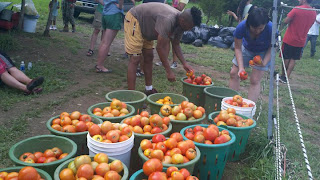 The Community Supported Agriculture Promotion Act will give crucial support to CSAs throughout the country as they connect underserved communities with local farms. Farm to table is not just a restaurant fad, but a true movement that is being recognized by our legislators. Let’s keep the momentum going!
at 2:33 PM